I Wanna Know How To Grow Cucumbers Outdoors

Cucumbers are cool…maybe because they’re made up of 95% water and, have an abundance of nutrients.  Cucumbers keep you hydrated, cool your skin, reduce swelling, irritation and inflation, reduce eye puffiness, improve bone health, have anti-cancer properties, aid weight loss,  help stabilize blood pressure, help heal diseased gums, help relieve muscle and joint pain…and have a host of other benefits for your body.  So why wouldn’t I want to become educated in how to grow cucumbers outdoors?

But, In my Early Days…

As a youngster, I could not tolerate them!  My taste buds were geared toward hot dogs, hamburgers, and French fries.

Now, growing them in my own vegetable garden, I have come to love them…for their crisp, crunchy texture and their slightly sweet but, faintly salty flavor.  They are great in salads, as pickles, or just by themselves.

Many people, who have learned how to grow cucumber plants in their backyard garden, view growing cukes to be almost as popular as tomatoes.

Slicing Cucumbers have a thicker skin and are generally used for salads and eating off-the-vine.  They are darker green, long, smooth, and lean, growing to around 6-8 inches…sometimes more. 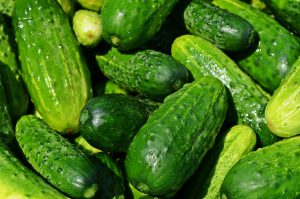 Pickling Cucumbers were developed for canning.  The vinegar or pickling mix can penetrate their thinner skin reaching the meat inside easier.  Picklers are lighter green with bumpy nodes and about half the size of slicers.

NOTE:  Seed packets and plants are typically labeled as either “slicing” or “pickling.”

Bush Cucumbers have short vines and are ideal for container gardens since they only need a width of several feet to grow to their potential.  Otherwise, they produce about the same physical and taste characteristics as Vining Cucumbers.  Some types include:

***Here’s where you can find additional descriptions, details, and thoughts on these cucumber varieties.***

Vining Cucumbers need room to grow.  Their vines can go on forever.  Many gardeners put their cukes in a cage but, as the plant grows, spreading numerous vines, they will soon outgrow it.  Enter my favorite: the garden trellis…not just for tomatoes.  Here’s an article about building a trellis for your garden.

For those of you who have experienced the all-too-familiar “cucumber burp”, there are burpless varieties to grow…but, you will experience a slight drop in flavor, in my opinion.

Alright now…enough of the cuke education!  Let’s get to growing them!

Now, Let’s Learn How to Grow Your Own Cucumbers

Try to buy “hybrid” seeds.  They have a stronger resistance to diseases and pests.

I buy the seeds, germinate them, transplant the seedlings into small sized biodegradable starter pots, then, when they have several “true leaves” (not the first “baby leaves”), harden off the plants before planting them directly into the garden.

How about some useful information when you are ready to transplant your seedlings into starter pots?

Time to put your young plants in the ground – When your cucumber plant has grown at least 3 to 6 healthy leaves, it’s time to transplant it into your backyard garden or container.

NOTE: Cucumbers grow much better with the ground dirt temperature above 70 °F (21 °C).

Pick a sunny area.  Cucumbers do best with 8 to 10 hours of sunshine each day.  They can survive on 6 or 7 hours but, they won’t produce as well.

Dig a hole just a bit deeper than the starter pot.  Mix some potting soil and a teaspoon of 10-10-10 fertilizer with the dirt, and place the plant in the hole using the potting soil/fertilizer/dirt mixture to fill in around the plant.

Space the plants at least a foot apart.  Personally, I prefer to space them 18 to 24 inches apart so they have more air circulation, lower instance of disease spreading from plant to plant, and they compete less with each other for the same nutrients.  You would be surprised how far their underground root systems will travel!

Water well and label the plant so, you know what type of seeds you want to buy next year if the plant grows well and the cukes are especially delicious.

To Trellis or not to Trellis?  That is the Question! 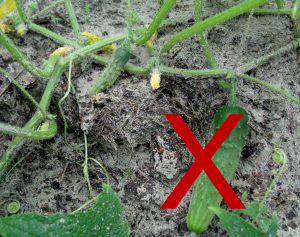 The trick is…keep the vines off the ground.  Cucumbers touching the ground are more susceptible to disease and infection by cucumber worms.

Bush cucumbers, with shorter vines, grow easily in cages..  You can buy metal cages.  You can make metal cages by forming a cylinder with a piece of chicken wire or rolled fencing: 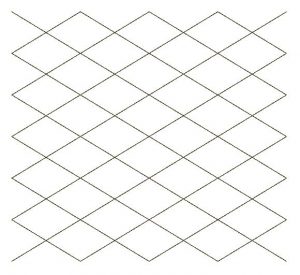 Or, you can hammer in 3 or 4 stakes around the plant and connect them with string to create a lattice:

Vining cucumbers grow better on a lattice or trellis because they give more support to the longer vines.

My tomato-style trellis works very well for cucumbers, too.  Matter of fact, I use the trellis for both bush cucumbers and vining cucumbers.  Building a Garden Trellis. Cheap and Easy!

There is not much to prune on my cucumber plants.  I typically remove dead, yellow, or powder-coated leaves, yellowing cucumbers, and cucumbers with end rot…from the garden area.  I keep the vines tied up off the ground, letting them grow as free as possible.  After the plants start producing flowers and cucumbers, they will grow more and more rapidly!

There are a number of pests that compete with us for the cucumber plants but, the biggest destroyer of cukes is the cute little cucumber beetle. 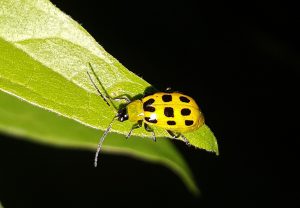 They are yellow…with black stripes or spots.  These pests eat leaves, stems, and cucumbers; they carry diseases like bacterial wilt; and, they lay eggs on the plant and in the soil around the plant.  The eggs turn into larvae (worms) that burrow into the cucumbers and enjoy the meaty part inside.  This is a very good reason for keeping the vines and cukes off the ground. 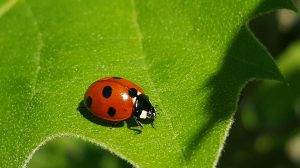 Don’t they look a little like lady bugs?  By the way, Ladybugs will also eat the cucumber beetle’s eggs, as well as other garden pests so, be nice to them.

So, how do you get rid of these cucumber “Terminator” beetles?

Well, you can either pick them off by hand…one by one…crush them…spending hours every day at the task…since they will proliferate greatly.  Or, you can use yellow sticky traps.  The beetles love the yellow color and the pheromone attractant.  And, the traps work like fly paper.  Once the beetles are on the traps, the sticky surface keeps them there.  You will never get rid of them completely.  But you can minimize their effect on your crop.

You can also grow alternative plants among your cucumbers that will drive away the beetles such as Ruta graveolens (rue or herb-of-grace), marigolds, geraniums, nasturtiums, castor beans or radishes.

And, lastly, bats will chow down on your cucumber beetles if are able to entice them to live in your area by building them a bat house and putting their favorite flowers close to it.  (I don’t think you’ll need the white picket fence, though.)

Pick cucumbers when they are green, ripe, and firm.  If you wait too long, they will start to yellow and become bitter.

NOTE: It is best to cut off the cukes with a sharp knife, scissors, or a good pair of garden shears like the Gonicc 8″ Pruning Shears.  Pinching or twisting them off may damage the vines if not done carefully.

Then, it will be time to think about canning some of them…which will be covered in a future article.  You may soon discover that the best pickles are made with cucumbers from your very own backyard garden!

Maybe that’s why, during cucumber season, when I bring an overflowing basket of cukes into the kitchen, My wife, the local canning expert, will look at me and say with a smile…“You mean a great dill to me.”

Are you a “cuke” lover or hater?  Any interesting tales to tell?  Let me know  in the comments section below or email me: jim@perfect-vegetable-garden.com.

8 thoughts on “Be Cool! Learn How To Grow Cucumbers Outdoors!”