Before We Learn How To Grow Eggplant… 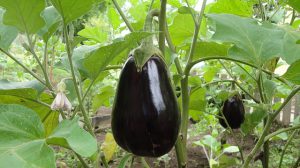 A little history…  The ubiquitous eggplant is thought to have originated in India, even though it was grown in Chinese gardens over 2,500 years ago.  So, natives of India knew how to grow eggplant a long, long time before we ever heard of it!

Thomas Jefferson introduced a number of vegetables from around the world…that he grew in his Monticello gardens…and eggplant was one of them.  (Year of the Eggplant – University of Missouri)

Though we think of them as vegetables, eggplants, like tomatoes, are actually fruits since they are botanically classified as berries.

Ranging in colors from white to purplish-white to deep purple, eggplants were once thought to inflict many harmful effects on humans…from pimples to insanity.  They were probably considered dangerous since they belonged to the nightshade family of plants…many of which are poisonous such as jimson weed, belladonna, and the deadly nightshade plant.

To this day, eating eggplant is discouraged for pregnant women due to its high acidity and its diuretic nature, which could stimulate menstruation.

Concentrated levels of solanine can make the eggplant’s leaves and flowers toxic if eaten in bulk quantities.  But, solanine is also present in peppers, potatoes, and tomatoes, which are also very edible members of the nightshade family. 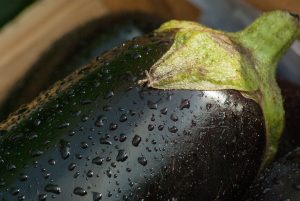 Disregarding the outdated, scary thoughts about the dangers of eating eggplants, they really do offer a good source of a number of vitamins, minerals, and other nutrients; vitamins A, B6, C, K, niacin, thiamin, magnesium, potassium, phosphorous, copper, folic acid, manganese, along with a big helping of dietary fiber.

Eggplants are also low in calories, fat, and sodium.

So, that makes them just as healthy as peppers, potatoes, and tomatoes!

Ways to Eat Them

How do I eat eggplants?  Let me count the ways… 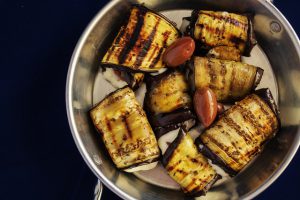 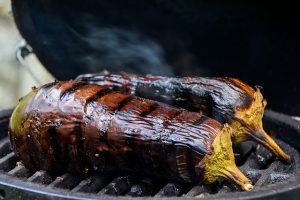 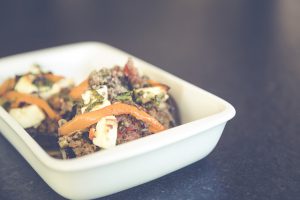 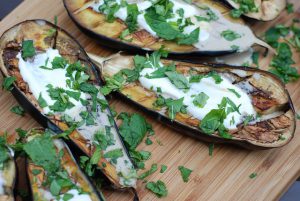 What would Greek or Turkey Moussaka be without eggplant?  How about Italian Egglant Parmigiana…or French Ratatouille…or Spanish Escalivada?

Use your imagination…and come up with your own ways to eat ‘em!

Eggplants come in various shapes, sizes and colors…varieties are round, egg-shaped, cylindrical, or elongated.  They can be white, yellow, green, reddish-purple, and purple so dark they appear black.

Unless otherwise indicated, these varieties benefit from staking or tomato cages.

How to Grow Eggplant in a Garden…

You have 2 choices…buy the plants…or buy the seeds.  The plants can be a little pricey compared to the seeds so, for this reason, I buy seeds and follow the protocols for germination, transplanting, and hardening off before putting my eggplants into the garden.  Start germination 2 months before the last frost and the eggplants will be ready for the garden at planting time. 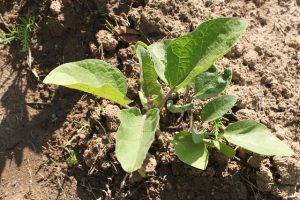 *Jim’s 50/50 soil mixture:  I use a 5-gallon bucket with a 50/50 mixture of dirt and potting soil and a couple of tablespoons of 10-10-10 fertilizer when putting seeds or seedling plants in the garden.

Ensure that you use a good quality pair of sharp garden shears or scissors when pruning or harvesting your eggplants…like these Gonicc 8″ Pruning Shears.  These garden shears have a lifetime warranty.  If there is ever a problem, send them your order number, along with some photos and they will send out a replacement to you immediately!

Essentially, you should prune eggplants much like pruning tomatoes…by removing the suckers…and any leaves on the lower portion of the plant that touch the ground.

Also remove leaves that are growing in towards the center of the plant.

A sucker grows between the crotch of the stem, or stalk, and the branch.  Just cut them off!

NOTE:  If the sucker already has a blossom on it, only remove the part above the blossom.  You may get a nice eggplant from that blossom!  Also, you may see more than one blossom growing out of the same spot on the plant…in which case, wait until the fruit begins to form on one of them and cut off any other blossoms in that spot.

Additionally, limit eggplants to between 2 and 4 main stems (3 preferably).  Cut off main stems that grow up in the middle of the plant to open it up for light and air.

Many home gardeners do not remove these main stems but, doing so will really improve the health and yield.

NOTE:  Removing the leaves first, before removing suckers and extra main stems will let you see more clearly where they are…improving the efficiency of your plant pruning.

Hand Pollination for Our Eggplants

Sometimes our natural pollinators, the bees, don’t always do a thorough job pollinating the flowers on our vegetables.  That can be especially true for eggplant flowers for some reason.  Mostly, it’s due to the weather…too cold…too wet…too windy…

If your eggplant flowers do not appear to be growing fruit, it is easy to hand pollinate them by using a Q-tip and rubbing it on the male stamen to collect pollen…and then rubbing the pollen-laden Q-tip on the female pistil.  It’s as simple as that! 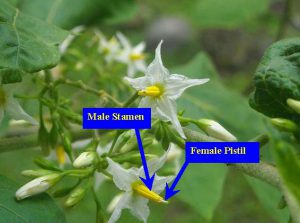 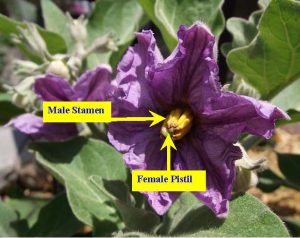 When do you pick your eggplants? 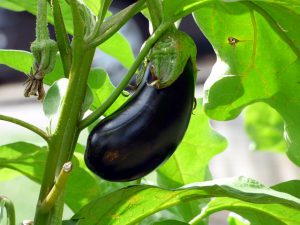 You pick them when they are firm, have a glossy shine, and are about 4 to 5 inches long.

NOTE:  If the skin starts to dull, it means the eggplant is becoming overripe.  It will start to turn brown, be a bit seedy, and the taste may be bitter.

With a sharp knife, garden shears, or scissors, cut the stem about an inch above the fruit.  Be careful, eggplants can be a bit prickly.

Use your eggplants as soon as possible after picking them.  More than a week in the refrigerator vegetable bin…in a plastic bag with a few holes…is too long if you want tasty eggplants.

You can freeze them but, cook the eggplants first by blanching or steaming…and then freeze them.  They can last 6 to 8 months frozen.

Watch out for the Colorado potato beetle and the flea beetle.  They are the most common enemies of eggplants.  Look for holes in the leaves as an indication of their presence.

A good fabric row cover can protect eggplants from these nasty critters.

*Take a look at Plants That Repel Bad Bugs and Attract Good Bugs for more details on keeping these pests away from your veggies.

If all else fails and the pests have overrun your plants, get a good pesticide from the garden store and go to war with them!  Follow label directions for successful applications.

The main disease, verticillium wilt, that infects tomatoes, peppers, and potatoes, will also contaminate eggplants.  Crop rotation is key in helping to prevent this disease.  If it hits your plants, remove the entire plant from the garden…trash it…or burn it.  If you use a good fungicide during the onset of the disease, it will be slowed down but not stopped. Again…follow label directions.

Jed Comes Up With Another One

My neighbor, Jed, a retired farmer, once told me about a time when he was awoken in the middle of the night by a knock on the door.

When he opened the door to see who it was, there stood a Hindu priest, a Jewish rabbi, and a lawyer.  The lawyer tacitly explained that they were on their way to a conference at the state capitol and their car broke down.

Jed, realizing that they wouldn’t be able to get a mechanic to fix it until the next day, offered to let the three of them spend the night.  “But,” Jed said, “I only have one spare room and it only has two twin beds.  So, one of you will have to sleep in the barn.”

The three talked it over and the Hindu priest volunteered to spend the night in the barn.

A few minutes later, there was a knock at the door.  It was the Hindu priest and he said, “There is a cow in the barn and, since cows are sacred in my religion, I could not possibly sleep under the same roof with one of them.” 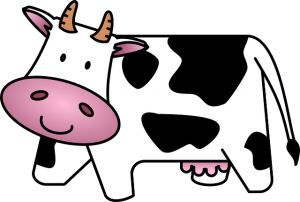 So, the Jewish rabbi decided that he would go to the barn for the night.

A few minutes later, there was a knock at the door.  It was the rabbi exclaiming, “There is a pig in the barn and, as an orthodox Jewish rabbi, there is no way I can sleep so close to pork. 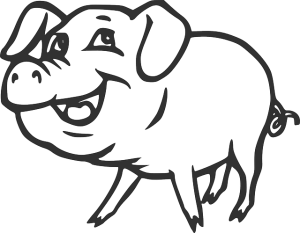 So, finally, the lawyer said, “All right!  I’ll sleep in the barn!”

A few moments later, there was a knock at the door…

It was the cow and the pig!

Jed had some smart animals, didn’t he?

You may want to read some more of Jed’s stories and anecdotes at the bottom of some of the other pages at the Perfect Vegetable Garden.

If you have any questions or suggestions about growing eggplants…or, if you have a good story to tell, leave a comment below or email me: jim@perfect-vegetable-garden.com.

2 thoughts on “How To Grow Eggplant – Another Great Fruit!”