Freeze Dried Noodles Are The Way To Go! 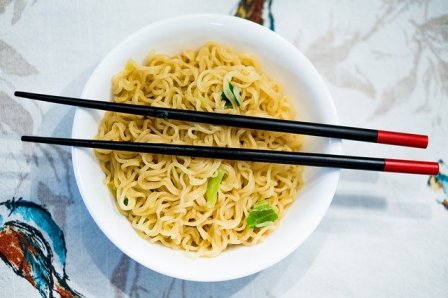 When Asian noodles can be bought at rock-bottom prices, buy as many as possible – and, turn the bulk of them into freeze dried noodles – with your very own Harvest Right Home Freeze Dryer!

Noodle varieties are endless.  But, here are two specific Asian noodles that are being freeze dried.  Japanese folks consider them a mainstay in their noodle diet – Yakisoba noodles – and Udon noodles.

Before getting into the freeze drying process, let’s get to know a little about these tasty noodles. 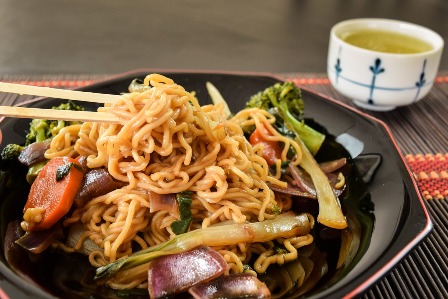 It is a Ramen-style noodle made from wheat flour – and, combined with a myriad of vegetables (commonly cabbage, onions, carrots, bean sprouts, or any other veggies of your choice) – as well as a special “Yakisoba sauce” (made with Worcestershire sauce, oyster sauce, ketchup, soy sauce and sugar or honey – the noodle is an excellent component of many stir fried dishes.

More often than not, a meat is added to the stir fry – pork, fish, chicken, ham, beef, or hot dogs – even Spam, potted meat, and Vienna sausages have been found in Yakisoba entrées!

Privately, I’ve been known to load Yakisoba into a hamburger or hotdog bun – with a little mayonnaise – and topped with red, shredded pickled ginger.  A real treat to eat – if I do say so myself!  I know that this may be an American way to consume these noodles – but, try it sometime – you may like it!

Don’t tell anyone – but, in a pinch – when preparing a spaghetti dish and no spaghetti noodles are available – I’ve opted to use Yakisoba noodles as a tasty substitute.

These extra thick noodles are also made with wheat flour.

They serve as an ingredient in a variety of soups and stews.  But, they are most commonly eaten “as is” – either piping hot (in the winter) – or ice cold (in the summer).

They taste great when dipped in soy sauce – spiced up with a touch of Wasabi (basically Japanese-style horseradish).

In the summer, Udon noodles are regularly served on a bed of ice cubes.

These thick and juicy noodles can really fill you up!

And – YES – I’ve also made sandwiches with these noodles, too – as well as utilizing them as a spaghetti noodle substitute.

To make the freeze drying process as simple as possible, I actually leave the noodles in their original packaging – slicing open one end of the package – and making sure to remove the packets of Yakisoba sauce that are included in the Yakisoba packages.  I don’t want to freeze dry the sauce packet contents. 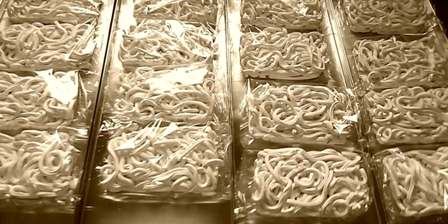 After loading the trays, I pop them into my Harvest Right Home Freeze Dryer – press “START” – select “NON LIQUID” – select “NOT FROZEN” – make sure the drain valve is closed (at right angles to the drain hose) – and select “CONTINUE.” See Harvest Right Home Freeze Dryer Operation for more detailed information about the operation of this freeze dryer.

Then, in about a day-and-a-half – or less – the noodles are freeze dried and ready for final packaging – for long term storage. 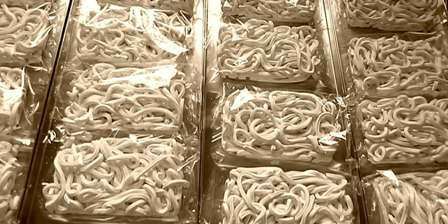 Preparing freeze dried noodles for long term storage has got to be just about the easiest task I have ever accomplished! 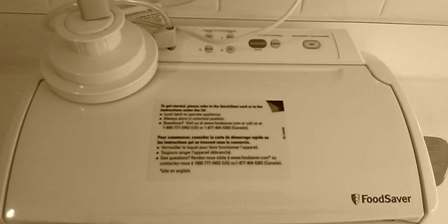 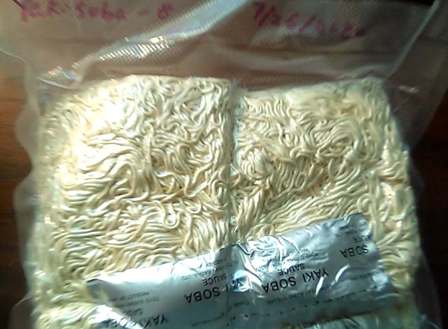 Place the noodles in a bowl of room temperature water until the noodles are saturated all the way to their core.  This could take as little as 10 minutes for the thin, stringy Yakisoba noodles – to as long as an hour or so for the thicker Udon noodles.

Then, use the noodles just as you normally would – if they were fresh from the store.

Nothing to it, huh?

I wouldn’t know how to act if I didn’t have my Harvest Right Home Freeze Dryer for adding great culinary goodies to my long term storage of food goods!

I can tell you one thing – this freeze dryer has saved me tons of money since I broke down and finally decided to invest in one.  In other words, my Harvest Right Home Freeze Dryer has paid for itself – many times over!!!

Comment below or email me with your questions and stories about freeze drying!