What Do I Know About Growing Green Beans?

You really want to know?  You want to know what I can teach you about growing green beans?  Well read on – and don’t stop until you get to the end – because you may miss some very important stuff!

Beans!  Beans!  The musical fruit!  The more you eat, the more you…  Wait a minute!  This article is about ANOTHER type of beans: GREEN BEANS!  And, how to grow green beans.

Speaking of green beans…what are they, actually?

Well, they are a healthy addition to any meal: 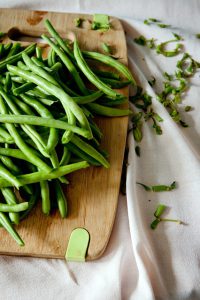 …just to name of few of their positive qualities.

Green beans are also called snap beans or string beans.  They can be grown as bush beans or pole beans…or even “half-runners.”  And, they are one of the most popular and easy-to-grow vegetables!

“Over 130 varieties of green bean are known.” (Green Beans – Wikipedia)

Bush Beans are green beans that are very compact, growing no more than 3 feet high and 2 feet wide.  They can usually support themselves without additional stakes or trellises.  And, they will produce all their veggies at about the same time so, staggered planting (every couple of weeks) is necessary to harvest them throughout the growing season. 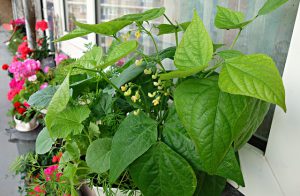 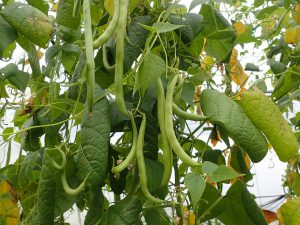 Pole beans, or vine beans, are green beans that will continuously grow upward (6 to 8 feet or more) and outward (forever) until the first fall frost.  When I talk about how to grow pole beans, or runner beans as they are sometimes called, I use a good chicken wire trellis.  My preference is growing pole beans because they are much easier to harvest and, in my opinion, they have better flavor.

I don’t have to bend over as much to pick them like I would with their shorter cousins, the bush beans…thus, saving my tired old back for all of the other back-breaking garden activities such as tilling, weeding, mulching, hoeing, digging, planting…etc.

Half-Runner beans are a cross between pole beans and bush beans.  They grow about the same height as bush beans but, they stretch out more so, they need more room to grow.

Here are my “best of the best” picks for bush beans, pole beans, and half-runners.

Even though I germinate the majority of my vegetable seeds before planting them in my home garden, green beans pop out of their seeds so rapidly that I normally sow the seeds directly into the ground after the last spring frost…when the soil temperature hovers around 55 °F (13 °C).

Pick a sunny area.  Green beans do best with 6 to 8 hours of sunshine each day.

Soak the seeds for at least an hour or so (I actually soak mine overnight.) to hasten the germination process…then drop several seeds into a one-inch deep hole, add a little potting soil, mixed with dirt, to give them a starting chance, and space them at least 6 inches apart.

I use a “soil inoculant” containing nitrogen-fixing bacteria…for all plant members of the legume family, including green beans and peas.  The green beans give food to the bacteria.  In turn, the bacteria give back to the beans by converting nitrogen from the air into a form that the plants can access through their root systems. Truly a marriage made in heaven which is mutually beneficial for both of the bacteria and the beans.

Slightly firm the dirt covering the seeds with your hand for better soil-to-seed contact.  This will also help the seed germination.

Water well and label the plants.  Then, if the green beans are healthy and tasty, you will know what type of seeds you want to plant next year.

This “6-inch” rule might be fine for bush beans but, I like more space for my plants.  Pole beans spread their vines continuously throughout the growing season…so I give them 18 to 24 inches between plants.  They get better air circulation, the spread of disease among plants is minimal, and their root systems compete less for the available nutrients.

Do We Need A Trellis for Green Beans?

So, how do we do it?  Here’s a common pole bean trellis called, a Teepee Trellis (for obvious reasons). 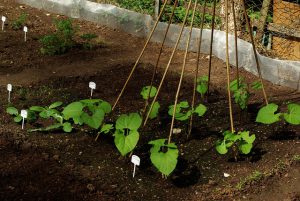 But, if you read my trellis article, you know that I have become a strong supporter of my chicken wire trellis. I use it for my tomatoes, cucumbers, and, also, my pole beans.  In truth, it works great! 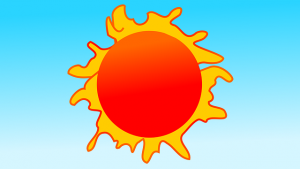 Green beans love sunny, warm weather…but, if the air temperature starts hovering in the 90 °F (32 °C) range, they will not produce flowers…which, in turn, produce the green beans.  Matter of fact, they will start to drop any existing flowers they have.  Thus, if the summer temperature gets too high…for too long…it would be practical to throw some shade netting over them, which can be attached with clothespins.

Guess what?  There are a host of pests who love green beans, too…just as much as we do!

These pests are the main culprits.

I sprinkle used coffee grounds or eggshells around my plants to protect them from cutworms.

The aphids and mites can generally be hosed off with a light spray from a garden hose.

There are also some plants that will repel the aphids, mites, and beetles:

If these natural remedies aren’t sufficient to reduce the pest population, you may have to resort to an appropriate insecticide to eradicate these dastardly villains!  Just…don’t use insecticides on green beans willy-nilly.  If the plants are experiencing high temperatures (see WARNING above) or they are starved for water, delay insecticide use until conditions improve.

As far as green bean diseases…you might see white mold or mosaic viruses.  Neem oil and sulfur are adequate fungicides to deal with these plant destroyers.  Just follow the directions on the label. 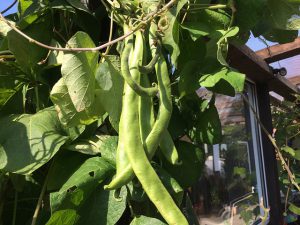 Watch your young, immature green beans carefully and pick them as soon as you see bumps in the pods.  They can be “snapped” off the vine easily with your fingers without damaging the plant stem…thus, the name, “snap beans.”

If you wait until they are fully mature, the seeds will be hard and the pods will be stringy.  Thus, the name, “string beans.”

Since you will have more green beans than you can eat, think seriously about how you want to preserve them.  They can be frozen, canned, dehydrated, and freeze dried.  Personally, I like the canning strategy for green beans.  They taste much better than the metal canned green beans bought in the store and, they have a whole lot less sodium without losing flavor.

One day, two green beans, Snap and Stringy, who were best friends, were walking down the street.  When they stepped off the curb, a car sped around the corner and ran over Stringy.  Snap immediately called 911 and helped his best friend, Stringy, as much as possible until the ambulance came and rushed Stringy to the hospital emergency room for immediate surgery.

Snap was in the hospital waiting room a long time worrying about the fate of his friend.  Finally, the doctor came in and said, “I have good news and bad news.  The good news is that your friend, Stringy, is going to live.  The bad news is that he is going to be a vegetable for the rest of his life.” 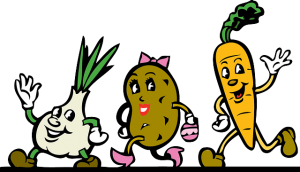 Are you a green bean fan?  When I was younger, they called me string bean because, I was so skinny, I could stand out in a hard rain and not get wet!  Any thoughts?  Try the comments below or email: jim@perfect-vegetable-garden.com.