Let’s Get To Growing Some Sunflower Seeds 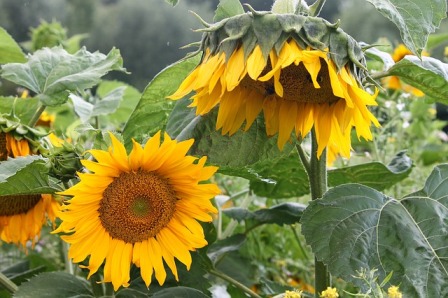 Remember the Three Sisters – corn, green beans, and squash?  Well, ancient Indian tribes in the regions of Arizona and New Mexico added growing sunflower seeds as the fourth sister – to draw pollinators to their crops.

It is believed that sunflowers were first cultivated in Mexico about 5,000 years ago – even though wild sunflowers were thought to have originated in the southern United States.

They didn’t gain popularity until being introduced into Russia in the 1700’s.  Then in the late 1800’s, this beautiful flower – shaped and colored like the sun, its namesake – began gaining fame in – you guessed it – back in the good ole U.S.A.  The variety sold in the seed catalogues at that time was none other than Mammoth Russian.

Besides Being Attractive, What Are Sunflowers Good For? 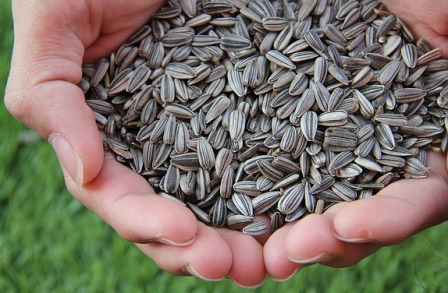 The most obvious?  The seeds make great snacks.  Roasted or raw, salted or not, they contain a hodgepodge of high fiber and an impressive mixture of vitamins and minerals.  I can eat them all day long!

Indian tribes used to grind them into flour to make cakes and bread – to be consumed along with their Three Sisters harvest.

Sunflower oil is used as an inexpensive cooking alternative to olive oil.  It was one of only a couple of oils that were permitted for use during Lent.

The oil was also widely sought after as topical ointment for skin and hair.

Fresh and dried sunflower roots were widely used by Zuni medicine men.  These Native American Pueblo purveyors of medical remedies in the Zuni River Valley chewed the roots and applied them as a poultice to rattlesnake bites after they had sucked out the venom.

The sturdy stems could function as a building material in primitive structures.  But, if you don’t feel like building a “sunflower house”, you can always eat the stalks – as they are prime candidates for a healthy sauté. 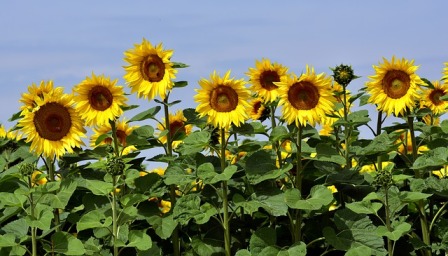 Sunflower blossoms were used in a number of religious ceremonies.  The blossoms also can be boiled to make a light tea – but, add a little honey.

The leaves can be eaten raw in a salad.  They can also be boiled or sautéed just like spinach.

All in all, the whole plant – from top to bottom – can be consumed or utilized in some way or fashion.  And, the health benefits are extraordinary… 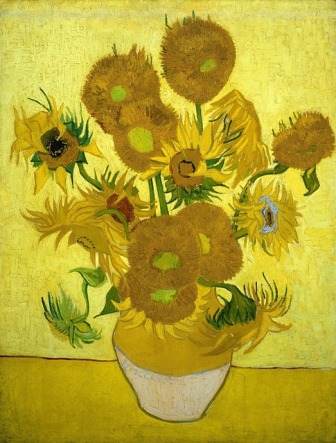 Sunflower heads follow the sun – looking East in the morning and West in the evening.  This is actually true only for immature heads.  Once the sunflower heads open up and mature, they will most likely remain pointed in a generally East direction.

Van Gogh produced a series of sunflower paintings – one of which was sold for a whopping $39.9 million dollars!

Sunflowers Are Oh, So Easy To Grow!

There are only TWO types of sunflowers that I will grow.  Are you curious to see what my special sunflowers are?

At the end of the growing season, completely remove sunflower plants from the garden area to keep from introducing plant diseases next year.

Time To Reap What You Have Sown

It takes roughly 3 months for sunflower heads to mature enough to be harvested.  Key signs of readiness are: 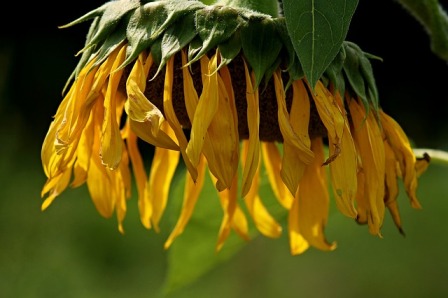 If all indications of maturity are noted, cut off the heads about 6 inches below the flower head and hang them in a warm, dry, airy place for a few days to ensure that the seeds are fully ripe and dry.  Cover them with a light porous fabric to prevent birds and mice from getting at them.  The fabric will also prevent seeds from dropping off the head. 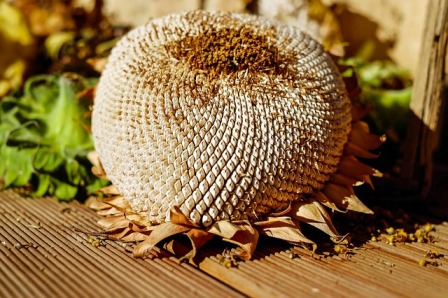 If it is very difficult to remove the seeds, then they are not dry enough.  Give them a few more days and try again.  They should be fairly easy to strip off the head.  TIP:  If the back of the head is dark brown, the seeds are surely dry enough to harvest.

Many gardeners I’ve talked with all have their very own “pet technique” for removing seeds from sunflower heads. 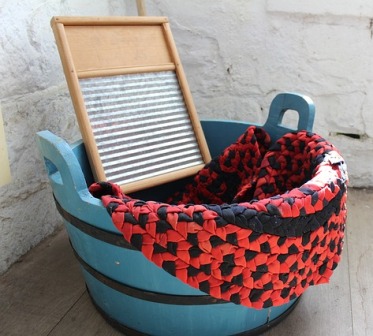 Some old timers just run their thumb over the head – peeling away the seeds as they go.  I tried this and got thumb blisters.  I guess they must have very leathery thumbs!

Others take an old washboard and just rub the head back and forth on it to loosen the seeds – or, they take an old stiff vegetable brush to the head.  I tried this – it works – but, I ended up with seeds all over the kitchen!

My own method consists simply of taking two sunflower heads and rubbing them together over a large colander.  Since that is where they will end up to be washed anyway – I am killing two birds with one stone.

After washing all the crud off the seeds, lay them out on a paper towel to completely dry.  Then, eat them raw – or roast them in an oven at 300o F (150o C) for about a half hour – and salt to taste.

TIP:  An easy way to crack the hulls of unshelled seeds is to place them in a plastic bag and roll over them with a rolling pin.

Fusarium is, more often than not, the main enemy of sunflowers.  It is fungi lurking in the soil and does the most damage to crops.

Downy mildew is another sunflower nemesis. 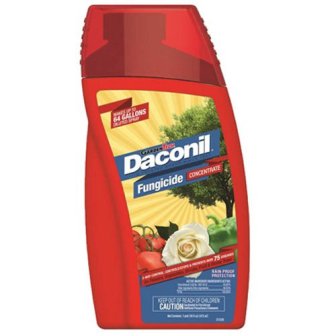 The best way of dealing with these diseases is to hit them with a good dose of a fungicide, like Daconil, as soon as they show up.  If you’re too late, then you will have to completely remove the plant from the garden and either burn it or throw it in the garbage.  Do NOT put diseased plants in your compost pile – or, the diseases will end up back in your garden next year.

Birds and squirrels go nuts over sunflower seeds.  When the heads get big and start to droop, cover them with a porous fabric to protect them.

Keep deer away with a wire fence or deer repellent. 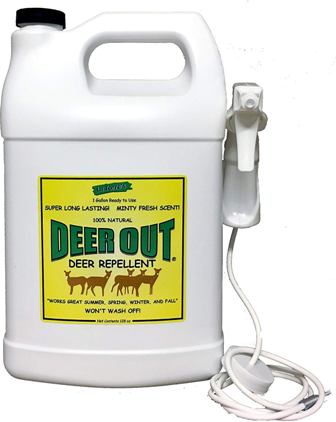 And, that’s everything I have to say on the subject.

The other day, my neighbor, Jed, the retired farmer told me that, “…seein’ those purty sunflowers” in my garden reminded him of the time back on the farm when he was sittin’ on his tractor taking a lemonade break and admiring his beautiful sunflowers when some ambulances and police cars came roaring down the road.

“When they saw me, they stopped and asked me if I had seen a busload of politicians that were in the area trying to get votes to win the election coming up next week.

I told them that, indeed, they had come down my road and their bus crashed and ended up in the gulley just over the hill.

Well, sir, they were a bit curious as to what happened to all them politicians and, I said that I buried them over next to my patch of sunflowers.

One of the policemen asked, ‘So, they were all dead then?’

I told him, ‘Some of them said that they were alive, but – you can’t believe anything a politician says – now, can you?’

And, that there bus is still perched in that gulley to this very day!” 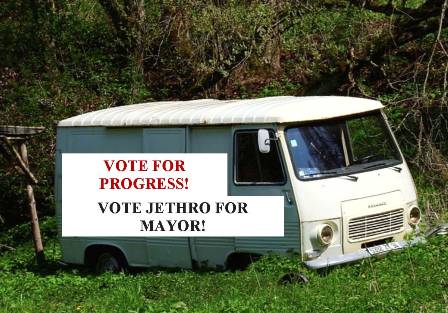 I just can’t get enough of Jed and his stories.  Would you like to read more about Jed?

I also love my sunflower seeds.  How about you?  Most of us have eaten store-bought seeds but, have you every enjoyed the home-grown version?  I welcome hearing from you in the comments or by email.