So, You Want To Know How To Grow Arugula?

In learning how to grow arugula, it is good to know that “arugula” is an American word for this leafy veggie with a fresh, tangy, peppery flavor.  In British English, it is called, “rocket” – or “garden rocket” – or “roquette” – hence the play on words that “this is rocket science.”  Why the British use the word, “rocket”, is beyond me – since this is actually a variety of arugula – at least in the U.S.A.

Arugula – In Days Gone By

Brought to dinner tables as far back as 600 B.C., arugula was a favorite as a raw salad component.  It was also cooked and stir fried – just like spinach. 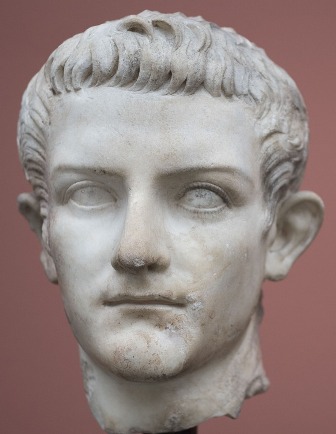 There was a longstanding belief, held mostly by the Romans and Egyptians, that this veggie – which is completely edible – leaves, flowers, seed pods, etc. – was a potent aphrodisiac.  The Roman poet, Virgil, mentioned it in a poem as an “enhancement for sexual delights” (loosely translated).  I guess you could call arugula the predecessor to Viagra!  Men – looking to “stimulate” their wives and mistresses – used to hide a goodly portion of arugula among the lettuce – in salads eaten by their wives and mistresses.  Oh, what a tangled web they failed to weave!

In Saudi Arabia, arugula is highly touted for consumption by newlywed couples.  Wonder why?  Newlyweds?  “Oh, I get the picture!”, says Jim, the Lifelong Gardener – with a sly smirk on his face.  “Uh-huh…”

Because of this widespread belief that arugula could jump start the libido, monks forbade its consumption in the monasteries back in the Middle Ages.  Knowing that monks were famous for meditating en masse, makes me think that controlling lust could have been one of the reasons!

Some Romans, including Pliny, The Elder, saw arugula as an anesthetic to alleviate pain.  And, it actually does work – especially for stomach pain caused from overeating – the leaves are so much easier to digest making it easier on the stomach. 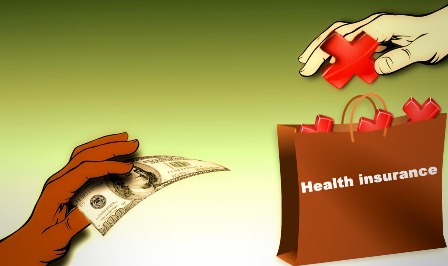 Low in calories, carbs, sugar, and fat – and high in fiber and protein – arugula has all the nutritional essentials – vitamins A, B, C, and K – and a host of minerals – calcium, iron, magnesium, manganese, phosphorus, potassium, etc.

So, some benefits of eating arugula are:

Though arugula has been popular throughout Europe, the Middle East, and Asia for hundreds of years, it only became a popular veggie in the United States about 30 years ago.

In India, they press arugula seeds into oil called, “taramira” – and, it is used for both medicinal and cosmetic purposes.

Due to arugula’s spiciness and tangy flavor, it is naturally resistant to many pests that will invade other leafy greens. 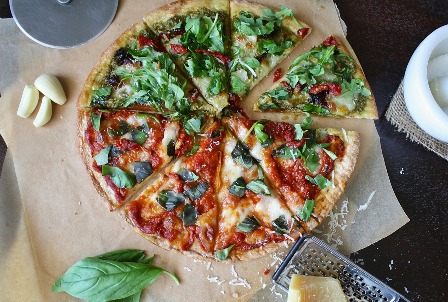 Besides being a salad ingredient, arugula finds its way into numerous cooked dishes.

Italians add it raw to pizza just prior to serving, as well as adding it to a variety of stovetop or oven pasta dishes.

Slovenians, especially in Goriška and Istria, slather their potatoes with it and boil everything, along with a few spices.  They also like to add arugula to soups.

In Egypt and Turkey – besides eating arugula raw as a side dish – maybe, with a little lemon juice and olive oil – they enhance their seafood dishes with it.

In the good ole U.S. of A., arugula is found in all the above forms – since America is the melting pot of all these communities and cultures.

Personally, I like to steam or sauté arugula – and add a dose of garlic salt for an added punch.  Many times, I will also substitute it for lettuce on my favorite hamburger sandwich.  Add some spicy heat with a few drops of Tabasco sauce and, I’m home free!

There are 3 basic varieties of arugula that I like.  One variety is called, “Rocket” – one is called “Selvatica” – and the third one is just called “Garden.”

Full descriptions of all 3 are listed in “The Best Organic Vegetable Seeds – For All Your Growing Needs” in the section for Arugula. 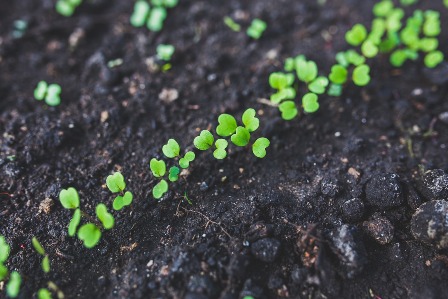 Growing arugula is pretty easy.  This leafy green needs sunshine – just like all other vegetables.  But, it also likes a little shade – so, try to find a growing area in the garden that gets some shade – preferably in the afternoon when temperatures are highest.  Alternatively, it also grows very well in containers – as long as it is outside in the fresh, clean air and sunshine.  Arugula can be grown in an indoor garden with grow lights but, it just “grows” – it doesn’t “thrive” and push its boundaries – like it does outdoors.

Arugula seeds are best planted directly into the soil.  They sprout easily so, the germination, transplanting, and hardening off processes can be skipped. 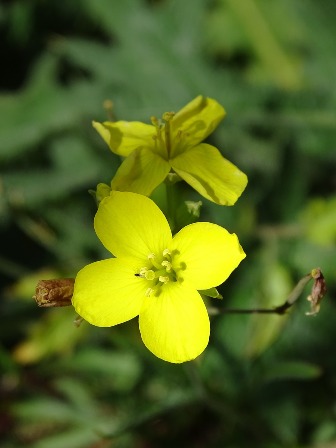 There’ll be a lot of young 2-to-3 inch leaves ready for pickin’ in a month or so – if everything goes as planned.  These leaves are the most tender and are great in salads.

Pick the outside leaves starting at the base of the plant – leaving the center alone to encourage additional growth.

When the flowers begin to appear, the leaves will take on more of a bitter taste.  At this stage, arugula is best when cooked – just like spinach.  Don’t forget that the flowers, seeds, seed pods, and stems are also edible.

Wrap arugula in a damp paper towel, place it in a plastic bag that has a few holes to allow air circulation, and refrigerate.  Make sure to consume the produce in a week or less – especially, if eaten raw. 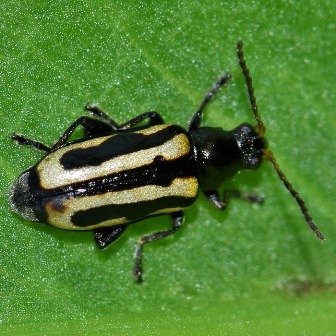 Very few pests will go after arugula.  Among them are flea beetles and aphids.  To minimize the attacks by these pests, lay a floating row cover over the plants.  If an infestation is found, the best weapon in your arsenal is a quality insecticide like Ortho Flower, Fruit and Vegetable Insect Killer.

On rare occasions, slugs may show up to munch on the arugula.  They will make large holes in the leaves or eat the entire leaf – much like what a hornworm does to a tomato plant.

A trick that works for me to get rid of slugs is place a deep bowl – with steep sides – into a hole in the ground and fill it up halfway with beer.  Slugs love beer but, they can’t swim – so, in the morning, there should be a goodly number drowned and floating around in the beer.  Dump the slugs out in the yard and, in no time, the birds will swoop down and gobble them up.  Every heard a drunk bird sing?  It’s hilarious!  They can really hit the high notes! 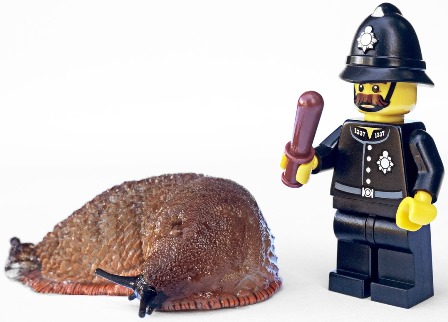 One alternative to my beer method is to bite the bullet and spend some quality evening time picking the slugs off the plants by hand.  This “quality evening time” is truly a tiresome and tedious task to partake.  (Say that 5 times fast!)

The other alternative is to spread used coffee grounds around the plants.  This never works for me because I never have enough coffee grounds.  But, this method will work – since slugs are unable to crawl across a coffee ground barrier.  Of course, periodically, fresh coffee grounds need to be added – to replace what has been washed away by rain and wind. 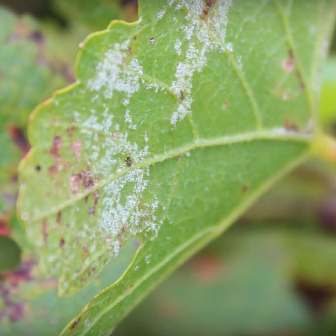 Leaf spot and downy mildew are the most common diseases that arugula is prone to.

You can recognize leaf spot by the round brownish red spots on the upper surface of the leaves.  These spots typically have a grayish white center.  This happens a lot in very hot and humid weather.

Downy mildew is characterized by grayish white patches starting on the underside of the leaves – eventually migrating to the topside.  A possible cause – besides having wet leaves on the plant overnight – could be over watering.  So, stick to the one inch per week rule.

In both cases, crop rotation is essential to minimize harassment by these diseases.  If caught early and there are only a few damaged leaves, pull them off and spray the plants with an fungicide like Daconil or Physan 20 – either of these products will, in all likelihood, slow down the spread of fungal diseases.  But, if the disease has overrun any plant, it’s best to just yank the affected plant out of the garden – roots and all – and throw it in a trash bag.  DO NOT put infected plants into a compost pile or anywhere near the garden unless you want the same problem to crop up in other plants this year – or in a future garden season.

I asked Marty the other day what attracted her to me.  She said, “I thought you were arugula guy!”  How ‘bout that?

So tell me about your arugula experiences in the comments section or, alternatively, email me if you so choose.

14 thoughts on “How To Grow Arugula – This Is “Rocket” Science”