That’s right.  I didn’t misspell it.  Brokali (bräk–ā’–lee), with the stress on the second syllable, is a cross hybrid between broccoli (bräk’–ə–lee) and Chinese kale – also known as Chinese broccoli.

This crossbreed is often referred to as broccolini – which, after seeing the “ini” ending, one would imagine that it is a smaller version of broccoli – and that is partially correct.  Brokali has florets – but they are much smaller – with a softer, milder, sweeter flavor than broccoli.  Some say that brokali, also called “tenderstem broccoli” in the United Kingdom, has a hint of an asparagus taste.

The brokali stalks are longer and thinner, too – making them much easier and tenderer to eat – as opposed to the thick, woody and tough broccoli stalks.

And, the leaves are quite edible – and flavorful – like that of Chinese kale.  And, don’t forget to chow down on some of the flowers – they are exceptionally sweet and succulent.

In other words, the entire plant – from the ground up – is consumable.

A Bit Of History 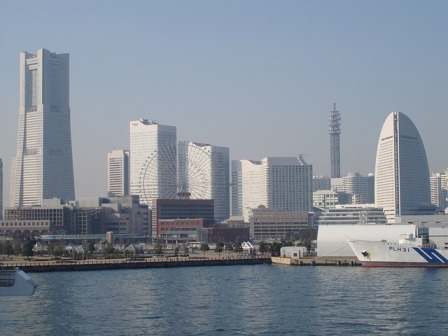 The Sakata Seed Company, Yokohama, Japan, took about 8 years to perfect this little veggie.  They began to grow it commercially in Mexico – in 1994.  Marketing in the U.S.A. started 2 years later.

Sakata partnered with the Mann Packing Company in Salinas, CA, in 1998, to officially market brokali as “broccolini.”

Then, operations were expanded into Australia – working with Perfection Fresh Australia.

It has lots of vitamins A and C – loads of fiber – and all the other healthy nutrients needed for a well maintained human body – calcium, potassium, iron, etc. – plus a smattering of other vitamins and minerals. 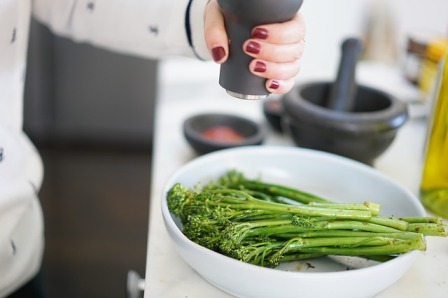 I like mine almost raw – after steaming them – or blanching them for a minute or less in some boiling water.  Finally, thrusting them into some cold water to stop the cooking process.

Sometimes I’ll chop them up and add them to a salad.  Other times, I’ll sprinkle them with a little garlic salt and have a bit of dressing – either bleu cheese or ranch – handy for an occasional dip of extra flavor.

Cook brokali lightly – to retain a little crunchiness – just like you would with broccoli.  If you cook brassica plants like these too long, they become mushy and lose most of their nutritional value.

Other than steaming and boiling, these little veggies taste great in a sauté or stir fry.

Try coating brokali with flour and beer batter and deep frying them.  They make a very crunchy and tasty appetizer.

The bottom line is – use the flowers, florets, and stalks just as you would with broccoli – and, use the leaves just like kale.

Brokali Varieties To Choose From

It is difficult to find brokali in a grocery store.  Typically, only gourmet shops carry it – and that is not always certain.  Call a few gourmet shops in your area and see if they have ever even heard of it – then, if they don’t already stock it, maybe they will add it to their inventory.  But, be prepared to pay a pretty penny for it.  Gourmet shop brokali is unquestionably not cheap!  I like the Apollo Hybrid and Atlantic.  They are at the top of my list!

Just like any other vegetable, brokali likes at least 6 to 8 hours of sun per day.  If you are planting in late spring or early summer, you may want to put them in an area of the garden that gets a bit of shade during the hottest part of midday.  Soil that drains well is another good thing.

Brokali is more heat tolerant than broccoli – but, they are also less cold tolerant.

Starting 2 months before planting, begin the indoor processes: germination, transplanting, and hardening off.

Seedlings are ready for the backyard garden when they are about 2 inches high.

Loosen the root ball a little to help root development.  If the root ball is too compacted, it will take longer for the plant to become established.

To promote a good root system, pinch off the lower leaves – leaving only the upper pair.  Then, put the seedlings deep enough into the garden soil – ensuring that the upper leaves are just barely above the ground. 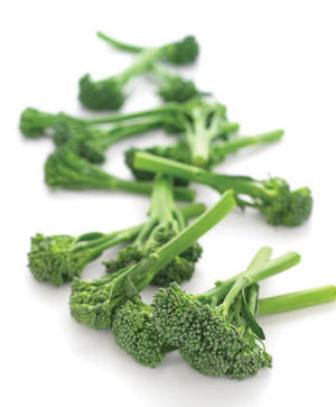 After the florets are an inch or two wide, pick off the main head first – along with its stalk.  That allows more side shoots to form and will stretch out the harvest.  Pick off side shoots and florets as they grow to your preferred size.  If all the side shoots are pretty much ready, then pull the entire plant.

TIP:  Use a good sharp knife and cut the stalks off at an angle to prevent rainwater from settling in the cut stumps.

Leaves can be pulled off and used as kale at anytime during the growth stages.

Typical fungal diseases like leaf spot, downy mildew, and powdery mildew are the main maladies that brokali experiences – just like most other brassica type plants.  Hit them with a good helping of fungicide like Daconil or Physan 20 when you first spot any problems on the leaves or stalks.  If a plant is completely overcome by disease, get it completely out of the garden before it infects its neighbors, bag it, and set the bag out for trash pickup.  Do not ever put a diseases plant anywhere near a garden or a compost pile.  You may find the same disease returning for a rematch next year.

Those dastardly aphids, along with cabbage loopers and flea beetles will chew up your entire crop if you let them.  At first sign of these creepy crawlies, attack with a vengeance with some Ortho Flower, Fruit and Vegetable Insect Killer close at hand.

Another Jed Joke (At Least, I Think It’s A Joke!)

My neighbor, Jed, a retired farmer, was lookin’ over my brokali harvest several weeks ago and he told me a story about his horse, Buddy. 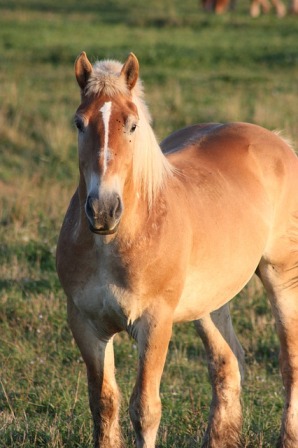 Jed said buddy was not only big and strong – but, somewhat of a hero.

“One day a guy came down my road lickety-split and drove off into the ditch.  Once I saw what happened, I grabbed Buddy and some rope – and headed up the road to help him get out of that there ditch.

I hitched Buddy up to the car and said, ‘Pull, Jasper – Pull!’

Buddy didn’t move – not one inch.

I waited a couple of minutes, and then I said ‘Pull Midnight – Pull!’

And, buddy pulled that car out of the ditch like nobody’s business!  It was a sight to behold!

Well that driver was so relieved – and happy to have his car out of the ditch – being no worse for the wear – but, he was a little curious – asking me why I called my horse by the wrong name 3 times before I used his correct name.

So, I explained to him that Buddy was blind.  And, if Buddy thought he was the only one pulling, he wouldn’t even try.”

Well I got to hand it to Buddy, that was one smart horse – but, Jed figured out a way to out-fox him!

Did you enjoy this brokali article?  Do you have any questions – or suggestions on future commentary?  Make some remarks below or email me – and let me know what you think…