Why Did Grandma Grow Rhubarb Plants? 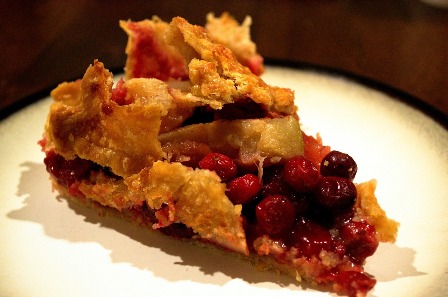 I have fond memories of the deliciously unique taste of my grandmother’s famous rhubarb pies.  There was a special place in her backyard where she was always growing rhubarb plants.

Since they were perennial plants – coming back year after year without the need to replant more of them – they had the habit of expanding their territory and taking over areas of the garden that was reserved for other veggies.  So indiscriminately chopping off a ton of rhubarb stalks was never a problem. 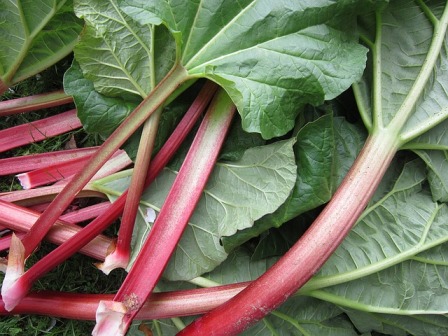 Grandma would task me with retrieving an armful of rhubarb stalks whenever she was ready to make some of those sweetly tart pies.  Everyone in the neighborhood – as well as the folks in her church – looked forward to those special occasions each year when granny would pass out samples of her creations.  The most famous of which was her cranberry-rhubarb pie – a taste that could only be made in heaven – which is where she is now – and, most likely, still bakin’ those pies. 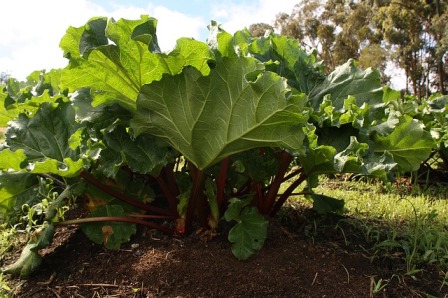 Dà huáng (the great yellow), as the Chinese called it, was used in their medical practices almost 3,000 years ago.  The plant’s properties – especially its roots – lent it to successfully serve as a potent laxative – among other things – for which it is still used to cure ailments even today – in many cultures.

In a short time, word of this red, celery-like plant spread into countries bordering the Mediterranean Sea and on into Russia – thanks to groups of traveling merchants like Marco Polo.  The problem was that it was so expensive compared to other veggies and fruits that only the exorbitantly rich families in medieval Europe were able to reap its benefits.

Rhubarb was so highly regarded that tremendous efforts were put forth to establish varieties that would grow well in areas other than its native lands – in the mountains of Tangut province in northwestern China.

It was not until sometime in the 15th century that Europe discovered rhubarb could be valued as a food source as well as a medicine. 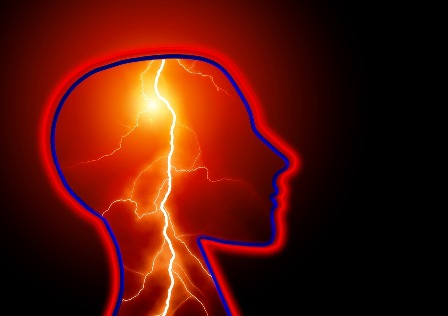 Rhubarb is a plant that has edible stalks but, the leaves contain ultra-high amounts of oxalic acid and are definitely NOT edible.

Early symptoms of oxalic acid poisoning are stomach pain, nausea, vomiting, and diarrhea – and, subjecting your body to large quantities of it could even lead to kidney stones, seizures – or, a coma.  The average sized human would still need to eat more than 10 pounds of rhubarb leaves at one sitting for the toxins to be life threatening.

So, let’s just stick to eating the stalks.  Okay?

Forced Rhubarb?  Forcing It To Do What?

It is very rare for rhubarb to be eaten raw unless it is “forced rhubarb.”  Forced rhubarb stalks are much less bitter – tasting a lot like slightly sour grapes.  Dipped in a little sugar, rhubarb stalks grown this way are a tasty raw treat for kids and adults alike – even today. 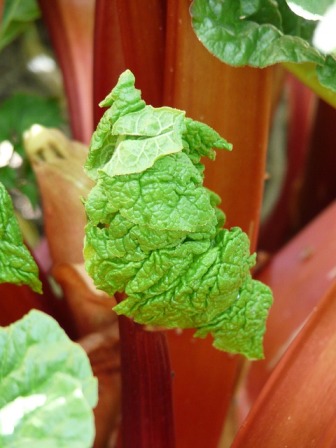 The “forcing” technique is basically putting a bucket or trashcan over the emerging rhubarb plants as crowns come up through the soil.  This keeps the sun off them and minimizes photosynthesis –concentrating growth in the stalks – as the plants push upwards looking for sunshine.  The leaves will be small and a very pale green since they aren’t getting any light and the stalks will be much longer, thicker, more tender, less bitter, and a brilliant bright pink or red.

Wait until the rhubarb plants are well established – no sooner than the third year of growth – before forcing them.  As soon as the crowns appear in the soil, pick a plant or two – and cover them with a deep bucket or trashcan.  Place a brick on top to hold it in place in case the weather gets a little too windy.  And, in a couple of months, there will be the most beautiful, long rhubarb stalks you could ever imagine.

NOTE:  After being “forced”, rhubarb plants need a break for a year or two in order to rejuvenate themselves before being forced again.  So, make sure that you have at least a half dozen rhubarb plants in the ground.  Then, two of them can be forced each year – in rotation.

I learned this technique from my grandparents.  Stalks grown in this way need much less sugar when cooked – and turned into various desserts. 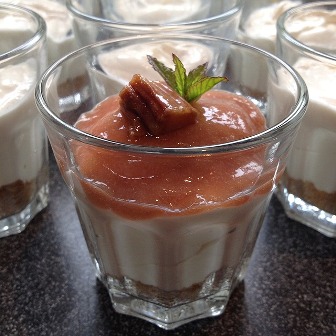 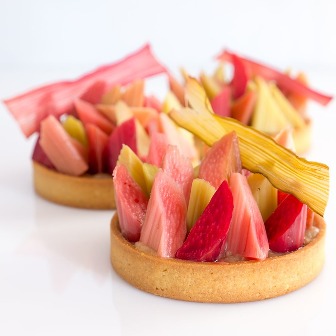 Most rhubarb stalks are boiled and made into a variety of desserts: jams, jellies, puddings, cakes, tarts, truffles.  And, we can’t forget my all time favorite – grandma’s legendary rhubarb pies.  But, no matter what type of dessert it is, when rhubarb is used, an excessive amount of sugar is necessary to sweeten it up a bit. 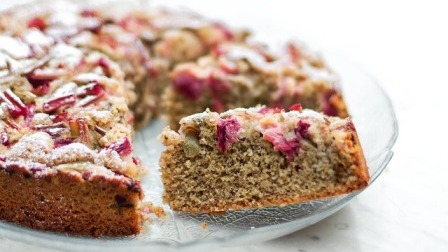 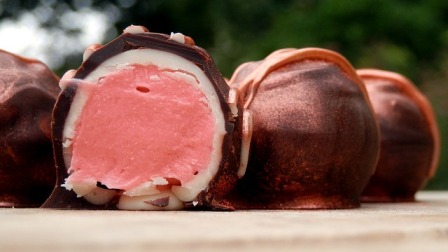 How To Grow Rhubarb

In learning how to grow rhubarb plants, it’s important to know that some varieties are better started from seed and some should be started from roots.  The best rhubarb sources can be found in “The Best Organic Vegetable Seeds – For All Your Veggie Growing Needs.” Included also is an extensive list of great sources for many other veggies! 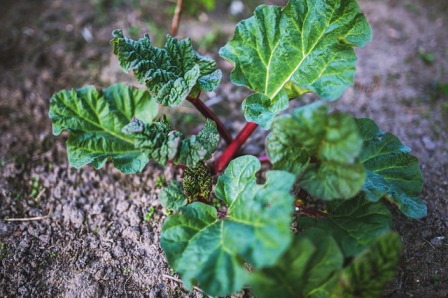 Since rhubarb is a perennial –meaning it only has to be planted the first year – pick a sunny area that can be dedicated to it – just as you would with the perennial, asparagus.  If cared for properly, a rhubarb plant will rejuvenate itself every year – for many, many years to come.

Pick a spot for the rhubarb patch that gets full sun during the day but gets some shade in the late afternoon.  Rhubarb plants grow best in hardiness zones 3 through 8 – but, they can handle the colder areas in zones 1 and 2 if they are grown in a greenhouse. 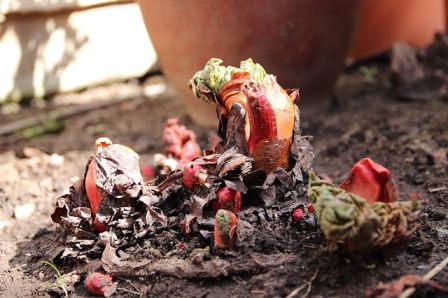 About 2 months before the last frost in the spring, germinate the seeds, transplant them into seedling pots, and then harden them off before sticking them into the dedicated rhubarb garden plot.

Then, when the time comes to plant the seedlings, simply follow the procedure for planting rhubarb roots.

The First Year – Don’t bother rhubarb plants during the first year of growth – this is the time to encourage strong, healthy crown and root growth.

The Second Year – Only take a few rhubarb stalks during the second year.  The plants are still trying to get firmly established.

The Third Year – When the plants are 3 years old, their growth will be inexhaustible.  At this point in time, you can get the buckets and trashcans out to “force” a couple of select rhubarb plants to grow long, tender, and luscious stalks.

The Dos and Don’ts 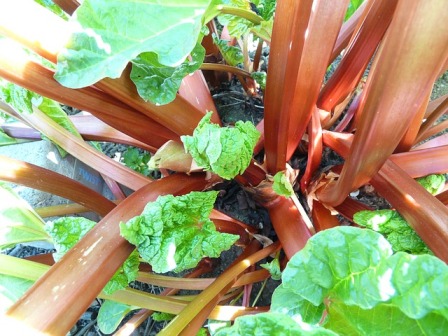 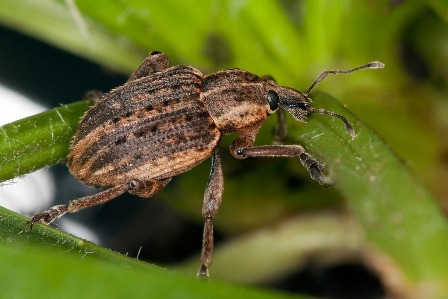 The dastardly weevil sees rhubarb as a wonderful site to lay its eggs while it feeds on leaves and stalks.  Then, its larvae offspring will gorge themselves on the rhubarb plants as they hatch.  If you see chew marks on leaves or stems, put an end to the weevil’s dominance by dousing them with some Ortho Flower, Fruit and Vegetable Insect Killer.

Slugs are notorious in their attacks on many veggies in the garden – and, rhubarb plants are no exception.  Put some stale beer in a rinsed out tuna can and place a few of the cans on the ground throughout the rhubarb patch.  The slugs love the beer yeast – so, they’ll climb into the cans looking for a drink – and drown.  End of story!

Most plant diseases are either fungal or bacterial – like leaf spot – which can infect rhubarb – especially, if the plants are not given enough space for air circulation.  Daconil or Physan 20 can go a long way to stopping an infestation if caught early enough.

Remove affected leaves or stalks when you see them.  Hopefully, you won’t have to trash the entire plant.  But, if you do, bag it – roots and all – and set it out on the curb for garbage pickup. 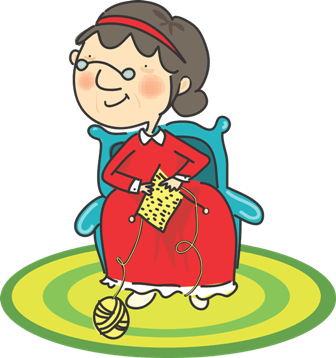 That was back in the days of old – when I was new.

That’s when I picked rhubarb in the cold til my face turned blue.

I carried armfuls of those red stalks into granny’s kitchen

While scratching all over ‘cause I was itchin’.

Them rhubarb leaves caused me to squirm and fuss.

They burned my skin so much I wanted to cuss.

But, the suffering was worth it.  My oh my!

Since granny turned that rhubarb into the most wonderful pie!

Alas, it was so long ago – in the days of yore.

Do you like rhubarb?  Have you ever eaten it raw or cooked?  Tell me your rhubarb stories in the comments below or by email.