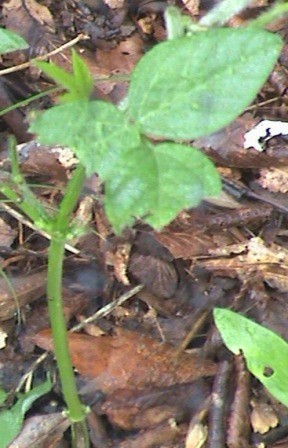 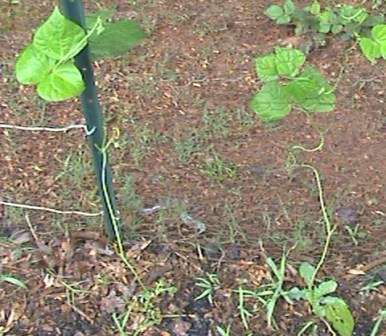 Recently, I was browsing through my garden – admiring how well everything has been growing – despite the fact that we have had such a long dry spell.

When I got to the row of edamame, I saw almost nothing but sticks poking up out of the ground.  Something had voraciously devoured most of the leaves!

What creature would do such a thing? 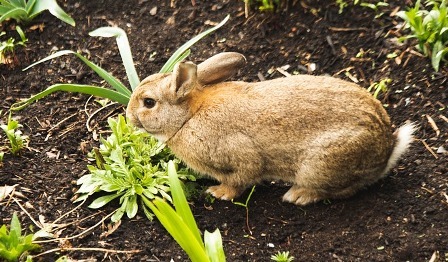 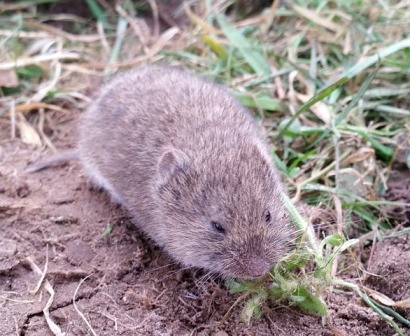 It couldn’t be rabbits – because, there is no place they can get through my 4 foot high chicken wire fence.  I checked the entire perimeter to make sure there were no gaps through which they could “bunny hop” through.

My next thought was that voles were the culprits.  These little field mice have the ability to decimate a home garden crop – and, in past gardening seasons, they have chewed on not only my edamame, but, they did a real number on my vining green beans.  And, they have been known to partake of some of my luscious radish plants in the fall. 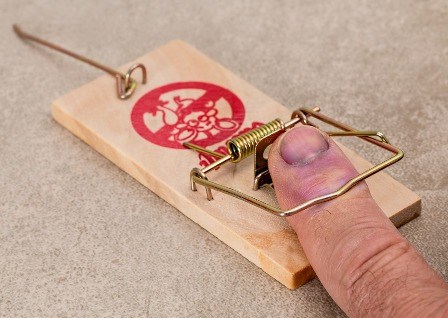 So, I set out a dozen mouse traps – for 3 days – and caught nary a one.  No voles in sight – dead or alive!  The only thing I caught was my finger!

What else could it be?  My 4 foot fence keeps most ground dwelling critters out of my garden!  I was perplexed and confused – and beside myself.  I scratched my head thinking of all the possibilities – to the point of creating yet another new bald spot – and then – when I was almost at a loss for a solution – I saw it! 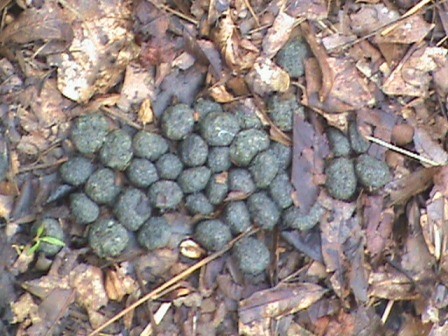 For those of you not familiar with the term “SCAT”, it is the polite way of saying “POOP” or “FECES” or “ANIMAL DROPPINGS.”  Now, I had found telltale evidence that deer were jumping my fence – in the dark of night – and happily munching on my precious veggie leaves.

The Deer Have Found My Garden!

During long dry spells – just like we’ve had this year – in which it didn’t rain for almost 2 months – the natural flora and fauna that deer usually eat – out there in the woods – doesn’t grow enough to sustain their numbers.  So, against their better judgment, they roam across larger and larger areas in search of food – tending to stray into more populated areas.

The deer can decimate not only vegetable gardens – eating tasty leaves and seeds that have been planted – they will also partake of the tender leaves of all those favored flowers and ornamental bushes surrounding your home.

They will also devour ripe tomatoes and corn – chewing chunks off the fruit and leaving damaged remnants still clinging to the plant.

I thought about making my 4 feet garden fence a bit higher.  But, deer have been known to jump an 8 feet tall fence with no difficulty – and, I really didn’t want to turn my garden into an “Escape From New York” movie set – with all due respect to Snake Plissken (Kurt Russell).

After endless hours of research and contemplation, it came down to – first – a quick-fix – and, finally – a more established, permanent solution. 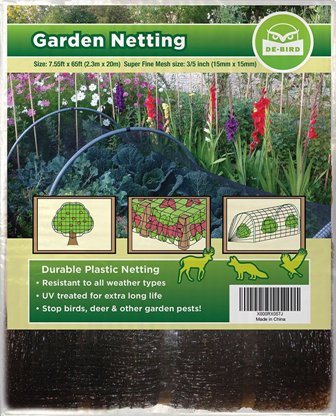 It’s time to get out some of my netting.  I keep a lot of it on hand to protect my tomatoes.  Birds love to jam their beaks into ripe, juicy tomatoes and the netting has gone a long way in protecting these succulent orbs .

Driving pairs of stakes into the ground every 3 feet or so and stretching the bird netting over the stakes would temporarily keep the deer from eating my edamame leaves – and, already, those leafless edamame plants have started to rejuvenate themselves.  Maybe, I won’t have to plant more seeds this year.

This heavy duty netting has worked quite well for me in the past – not only for protecting tomatoes – but, also other veggies in some of my previous “fenceless” gardens.  It is very durable and lasts for years.  But, even so, I always add a new pack or two each year – which means I keep an overabundance of bird netting in my garden shed!

Those gosh darn deer even had time to fill their bellies with most of the leaves on my Kentucky Wonder and Kitchen King green beans.  So, I gave my green beans some bird netting protection as well.

Over The Long Term

This has become the Year of the Deer Wars – and, I was bound and determined to be the victor!  They started it.  But, I was going to finish it – once and for all.

My first thought was to add some scarecrows – but, once the deer got used to their presence, the lure of the tasty veggies leaves would overwhelm them and they would just dance an Irish jig around my straw-filled friends – as they enjoyed their leaf and seed buffet.

I needed a long lasting remedy!  A resolution that would not harm the deer – just encourage them to find another place to feed – like my neighbor Jed’s garden!  Being a retired farmer, Jed is used to seeing deer attack his crops.

I looked at similar products – the Contech Scarecrow – and the Havahart 5266 – but, my biggest take away was that, even though these two can also do the job, the Orbit Yard Enforcer gives me more ability to adjust distance, angle, and duration – and, there wasn’t much difference in price.  I also found that I could piggyback other sprinklers through it to soak any critter not in the direct path of the Orbit motion detector water sprayer.

With the 40 foot detection range, I could place the Orbit Yard Enforcer in a central location in my 70 feet long, 35 feet wide garden to catch virtually any “unauthorized” movements – day or night.

Adding a couple of extra sprinklers gives me complete water spray coverage to shoo a whole herd of deer out of my precious garden!

This marvelous invention also promises to keep the neighbor’s cats from using my garden as their own personal litter box – a surprising and welcome perk!  I’ve always wanted to douse them with a water hose – but, I could never actually catch them “in the act.”

You can’t go wrong with the Orbit 62100 Yard Enforcer to discourage those wild, 4-legged rascals from doing damage to your crops!

Now, I have am at peace.  I have clashed with the critters – and come out on top of the heap – a very, very satisfying turn of events!

Now, it’s a “wait and see” game – hoping that my edamame and green beans can rebound and still offer a decent harvest this summer!

Have you had problems with pesky animals doing damage to your garden?  Tell me your story in the comments below or by email.