These answers are for the July 2019 Quiz.  You can find all the solutions somewhere – hidden in the pages of The Perfect Vegetable Garden!

The question was:  Achocha is also known as: A) A Mexican rodent-like creature, B) A South American game – much like soccer, C) Caigua – A vine growing fruit eaten as a vegetable, D) Bolivian cucumber, E) Both “C)” and “D)”, or F) None of the above. 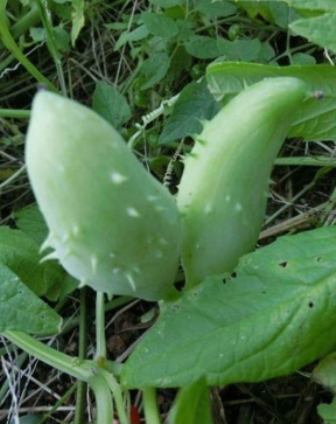 This veggie tastes like a mild cucumber – with a hint of mint and bell pepper.

The young fruits can be sliced and added to any dish suitable for cucumbers.

The more mature fruits – having a tougher skin – are perfectly stuffed with meats, fishes, and cheese and baked in an oven.

The question was:  Jim, the Lifelong Gardener, loves – loves – loves – Eight Ball!  What is he referring to? A) Jim must like to play pool – and Eight Ball is his main game, B) Maybe he thinks he is “behind the Eight Ball”, C) I think he is talking about some kinda food, D) All the above, or E) None of the Above.

C) I think he is talking about some kinda food! 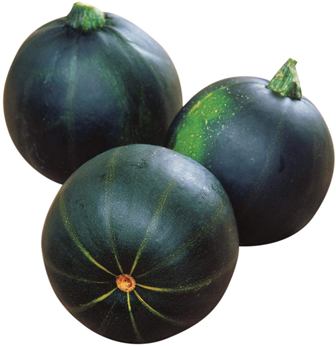 Jim does enjoy a good game of pool – but, his favorite game is Nine Ball – not Eight Ball.  You heard it here – FIRST!

Jim would never admit to being “behind the Eight Ball” – otherwise known as being “disadvantaged.”  He would much prefer to turn any negative into a positive.  In other words, use any failures as a teaching tool to avoid repeating mistakes.

But, hey now – Jim’s a gardener – so, it is common sense to think that the Eight Ball he loves is some kinda fruit or veggie.  And, lo and behold!  It is!  It is a dark green orb-like squash about 4 inches across – a bit sweet, nutty, and buttery – think Italian zucchini.

But, don’t let Eight Ball squash grow much bigger than 4 inches wide – because it will become as hard as a tree stump.  Then, the only recourse is to paint it black – add the number “8” – and throw it on the pool table for a game or two!

The question was:  Jarrahdale is a mythical place in the land of Narnia.  Just ask Aslan – Narnia’s famous lion!  This statement is: A) True or B) False.

The city in the Chronicles of Narnia is Cair Paravel – where the kings and queens reside. 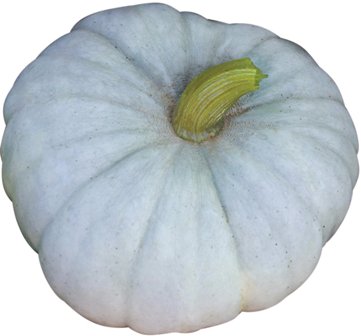 Jarrahdale is a strain of blue squash – commonly used to make the most breathtakingly delicious pumpkin pies.  It originated in Jarrahdale, Western Australia – a tiny little town of less than 2,000 residents – about 45 kilometers southeast of Perth.

The innards of the Jarrahdale pumpkin squash are about the same color as standard American pumpkins – but, the smell is much, much more pleasant and satisfying.  Once you’ve eaten a pumpkin pie made with Jarrahdale, you’ll never want to use regular pumpkins – ever again!

E) The southeastern section of the Appalachian Mountain range. 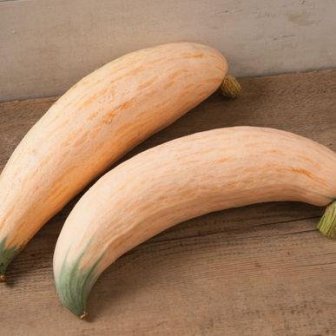 This isn’t a trick question.  Because, the southeastern section of the Appalachian Mountain range runs smack dab into the hills of North Georgia – encompassing the northeastern area of the state!  That’s why this squash is called the “North Georgia” Candy Roaster.

The Cherokee Indians get the credit for this smooth and sweet squash – so sweet that it has “candy” in its name.  Believe it or not, it actually gets sweeter and sweeter as time goes on…

Great not only in desserts like pies – it also makes great bread and stews – among others.

The question was:  What squash looks like a flying saucer – or a child’s spinning top? A) A Queensland Blue Australian Squash, B) A Blue Hubbard Squash, C) A Pattypan Squash, or D) Zucchini Squash. 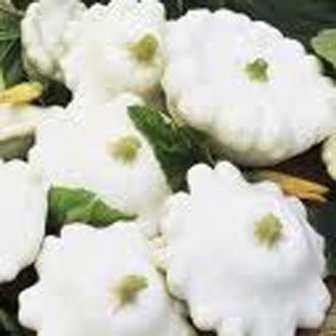 If you see this one in the grocery store, you will instantly recognize it – because of its unusual look.  They taste much like a tender zucchini – just sweeter.  But, pick them when young and small.  If you wait until they are fully mature, pattypans taste more like potatoes.

Southern France calls this squash “pâtisson” – or “cake in a scalloped mold.  Other countries may call it, peter pan squash, granny squash, or sunburst squash.  The folks in Poughkeepsie, NY, call it “schwoughksie” (pronounced, “shwooxie”).

The question was:  What type of squash does this trombone remind you of? A) Tromboncino, B) Red Kuri, C) Sweet Potato Squash, or D) None of the above. 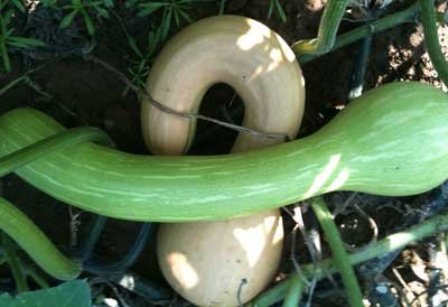 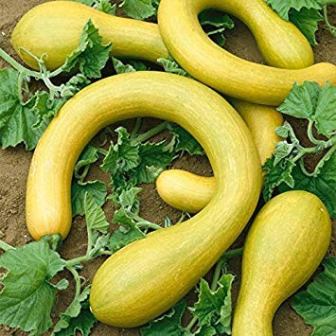 This has got to be the easiest “no gimmick” question for this month, don’t you think?  Drop the “e” off of trombone and add “cino” and there you have the squash’s name.

Being a summer squash – for the most part – tromboncino has a higher than normal tolerance against pests and diseases.

Hailing from northwestern Italy, tromboncino grows pretty straight – resembling a trombone shape if grown on trellises.  If left to its own devices – to grow along the ground – this squash will curl up on itself – changing color from pale green in its youth – to a bit of a beige color when it is fully developed.

The question was:  What type of grass did Jim, the Lifelong Gardener, use as a cover crop over the winter? A) Triticale, B) Barley, C) Buckwheat, D) Oats, E) Cereal Rye, F) Annual Ryegrass, or G) None of the above. 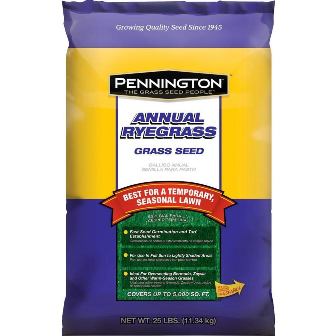 Jim’s choice was annual ryegrass.  It grows amazingly fast – to quickly thwart weed growth – and, it is the least expensive of all the choices.  And, Jim is always looking for ways to save a buck or two!

Matter of fact, the annual ryegrass just keeps coming back – even after spring tilling and planting.  But, having it peek out between the veggies in the garden is much better than seeing all those nasty weeds – thistles, crabgrass, etc.

The question was:  What type of nitrogen fixing legume cover crop was incorporated over the winter by Jim? A) Alfalfa, B) Clover, C) Peas, D) Beans, E) Vetch, F) None of the above. 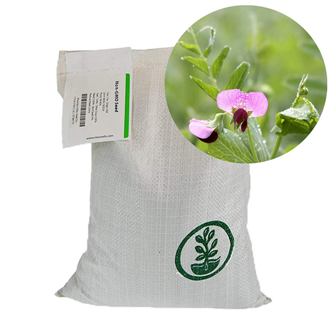 Specifically, Jim used Austrian Field Peas – because they were not only the less expensive – but, also the most proficient at adding nitrogen back to the soil.

Mixing 5 pounds of the peas in with the annual ryegrass, gave enough cover crop seeds to sow the entire 2,400+ square feet of the garden.  And, over the winter, the garden area retained the most vivid green color – standing out midst the brown Bermuda grass in Jim’s backyard. 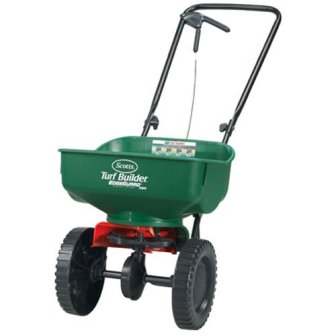 Jim is not “Johnny Appleseed.”

And, Jim is always looking for the easiest and quickest way to accomplish any garden task.  Of course, he used his Scotts Broadcast Spreader – and, the work was done in less than half an hour!

Never do things the hard way.  It takes all the fun out of it!

A) Before they go to seed 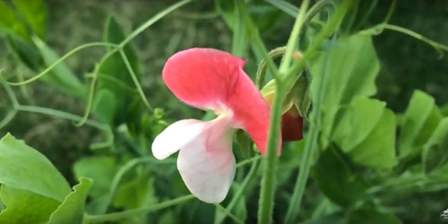 Waiting until AFTER the cover crops flower and go to seed, will allow them to take over your summer garden – crowding out the veggies and competing with them for the soil’s nourishment.

So, I get out my handy, dandy Husqvarna Garden Tractor and chop them down as much as possible – then, work them thoroughly into the soil with either my electric or gas tiller.

Choosing to do cover crops in the winter means that you must be cognizant of the extra steps you will need to take to ensure a healthy growing veggie garden in the spring.

This answer is found in Cover Crop Garden For The Backyard Gardener.

I’m baking a cake from scratch and the recipe calls for 4 cups of flour.

What are two (2) different ways for me to accurately measure the 4 cups of flour needed for the cake? 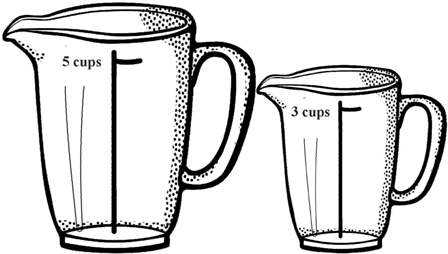 Simple is – as simple does.

Nothing like a down-to-earth solution to what seemed to be an insurmountable problem!

This brings to a close another month of testing – to see if folks are paying attention to all the informative and detailed information in The Perfect Vegetable Garden.  Always lookin’ for comments or emails from y’all.  Don’t disappoint me!