Want To Be Enlightened For How To Grow Peppers? 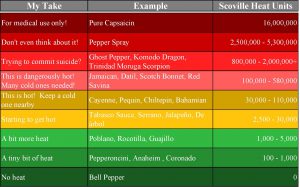 Peppers are rated on a Scoville Heat Index scale, created in 1912 by Wilbur Scoville, a pharmacist. (Scoville scale – Wikipedia)  Bell peppers are sweet and no heat…at the bottom of the scale.  Serrano, jalapeño, and cayenne are medium hot peppers.  Once you become educated about how to grow peppers, you’ll want to grow them all! 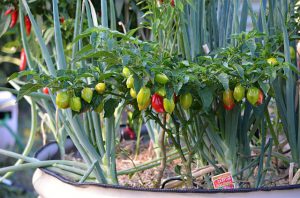 Then, there are the “burn your mouth forever and ever” peppers, Ghost Pepper, Komodo Dragon, and Trinidad Moruga Scorpion. 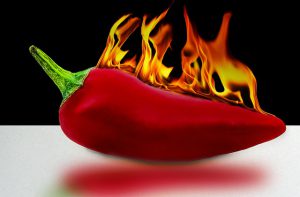 They are some of the hottest in the world. 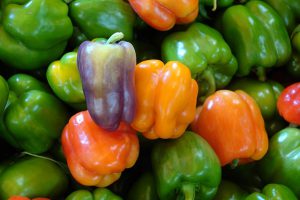 Most peppers are available in several basic colors: green, yellow, orange, and red.  Some of them are also brown, white, and purple.

It isn’t necessarily the color that signals the Heat Index level.  The amount of capsaicin present will determine how hot they become.  Therefore, the more mature fruit on the plant will contain more capsaicin and be hotter.

You just bit into a pepper so hot that you have a forest fire in your mouth!

Milk not only “does a body good” but, it will also put out the fire!  The fat and oil in dairy products will dissolve the capsaicin in your mouth.  Use whole milk, full-fat sour cream, or yogurt to do the trick!

It goes without saying that there is an incredibly long list of uses for this garden specialty…both raw and cooked.

Being low-calorie, Peppers are stuffed with vitamin C.  Also, they contain a number of other vitamins, minerals, and antioxidants.

Peppers, both sweet and hot, can improve eye health as well as help prevent cancer and heart disease.  They also lower the probability of anemia and other recurring diseases.

Some of My Favorite Bell Peppers, Hot Peppers and Hot-Sweet Peppers! 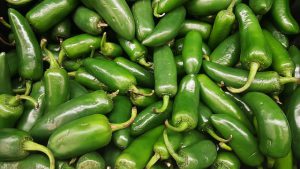 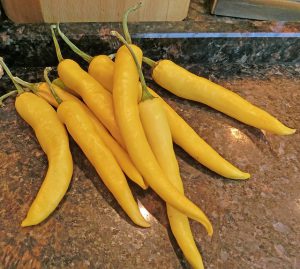 My Dad Was a Pepper Fanatic

My pepper romance started because my dad was obsessed with all kinds of peppers…so much so, that he actually conducted training classes for me on growing them!

My first “home-school gardening pepper growing class” was simply, “How to grow green peppers”, which covered the basic needs of peppers in the world of gardening.

When my teacher-dad felt I had mastered the pepper basics, he stepped it up with “How to grow giant peppers”…and, in that training, he was more specific about when to fertilize the pepper plants and what types of fertilizer to use.  This fundamentally boiled down to applying a standard 10-10-10 fertilizer during early growth and changing to applications of a potassium-rich fertilizer, 0-0-60, during the flower and fruit phases.

The toughest class for me was “How to grow jalapeño peppers” because I decided I was going to show how strong I was by taking a huge bite out of a jalapeño to show how unafraid I was.  But, being a youngster, with a tender tongue full of sharply critical taste buds, I ended up with a mouth full of fire.  I guess that was when I learned that everything should be taken in moderation.  I also learned how valuable milk was as a soothing extinguisher for a jalapeño-produced oral inferno.

So, Now…Ya Wanna Grow Some Peppers?

Alright, now, what’s the first thing you should remember about how to grow peppers?

You can buy plants…or, you can buy seeds.  It depends on whether you want to pay twice as much for a plant as you do for one packet of seeds.  I prefer going the non-GMO seed route.

Pepper seeds can take a week-and-a-half to germinate and several weeks navigating through the seed pot process.  Hence, remember that you want them ready for putting in your backyard garden or container garden after the last spring frost…so, plan accordingly.

Here is some in-depth direction for seed germination.

Here are tips for transplanting seedlings into biodegradable starter pots.

And, don’t forget to harden off your seedlings before putting them into your outdoor garden.

Put ‘em In The Ground

Peppers need 8 to 10 hours of sunshine each day.  So, make certain that they are placed in an area where taller plants won’t limit their sun exposure. 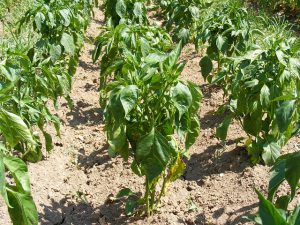 I also use the extra room between rows so I can easily move around my plants, mulching, weeding, pruning, and harvesting.

Dig a hole just a bit deeper than the starter pot.  Mix some potting soil and a teaspoon of 10-10-10 fertilizer with the dirt, and place the plant in the hole using the potting soil/fertilizer/dirt mixture to fill in around the plant.

And, as I say in all my vegetable guides, water well and label the plant so, you know what type of seeds you want to buy next year if the plant grows well and the peppers are especially delicious.

Several weeks after transplanting the peppers, I start a bi-monthly application of 10-10-10 fertilizer until they start to flower.

Then, I switch to a high potassium fertilizer throughout the flower and fruit cycle.  That’s how to grow big peppers! 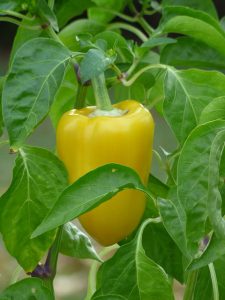 Peppers are fairly strong plants so, normally, I don’t trellis or stake them.  But, beware of a strong storm which could lay a number of them on their side.  I’ve been blindsided a time or two…

Also, as the peppers get very large, they will begin to weigh down the branches and putting a stake next to them for support is very prudent.  Otherwise, being a bit brittle, these branches will break off if stressed too much.

Peter Piper Picked Them Peppers.  We Can, Too!

Peppers are ready to be picked when they are the color shown on the seed packet. 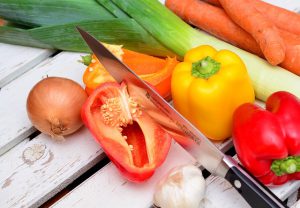 Ripe green bell peppers, if left on the plant will eventually turn red…then orange…then yellow.  When peppers are fully ripe, remove them with shart knife, scissors, or garden shears like these Gonicc 8″ Pruning Shears, leaving a part of the stem on the fruit.

So, there you have it.  Growing peppers in a nutshell.  Now, you can toss them in a salad, add them to stews, stir fries, skewer them for a barbecue, or oven-bake them stuffed with hamburger and tomato sauce.  There are a thousand-and-one ways to incorporate them into a healthy, nutritious lifestyle.

Pick off the dead leaves, the overripe fruit, fruit with blossom-end rot…and that about does it.  You can hasten flower growth by occasionally harvesting a few immature fruit.

The corn earworm and armyworm can be a problem.

The corn earworm is repelled by certain plants:  cosmos, geraniums and thyme.

And, if the infestation of either one of these pests reaches epic proportions, it is time, reluctantly, to call in a pesticide to fix the problem.

Just like tomatoes and cucumbers, peppers can get blossom-end rot, a calcium deficiency.  Adding some eggshells or dolomite lime will alleviate this problem.

Bacteria wilt and bacterial leaf spot are peppers’ most common diseases but, they tend to defend well against these maladies given enough space for air circulation and proper pruning.  If they do become an issue, douse them with a fungicide…but, make sure to carefully follow label directions.

Don’t forget…rotating your peppers each year can discourage re-infestation of pests and diseases.

What is the Meaning of Life? 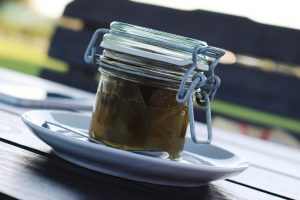 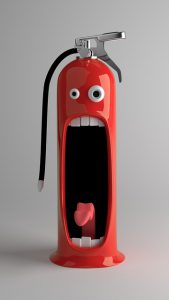 What you do today could burn your butt tomorrow!

The wisdom of a middle-aged Forrest Gump…

How hot do you like your peppers?  Have you eaten “burn your mouth forever and ever” peppers?  If so, what do you use to cool your throat after setting it on fire.  Or, do you stick to mild ones like bell peppers or pepperoncini?  Comment below or email me: jim@perfect-vegetable-garden.com.

2 thoughts on “How To Grow Peppers. They’re Sweet. They’re Hot. They’re All Good!”