The “How To Grow Radishes” Saga

“Radish” is a derivative of the Latin word “radix”, meaning “root”…the “root” of words, or math, or plants.  I guess that means if I say, “I’m going to teach you how to grow radishes”, I am really saying you’re going to learn how to grow a bunch of red root plants! 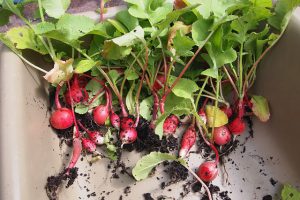 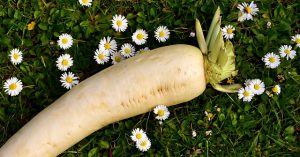 Some say radishes came from China.

It is true that radishes are a major food source for Asian cuisine, especially in Japan where they grow daikon radish and, the long, white ones are the most prized.  Every year on January 7th, Japanese celebrate the Festival of Seven Herbs (Chinese celery, shepherd’s purse, Jersey cudweed, chickweed, nipplewort, turnip, and daikon radish).  There are also packets of the seven herbs sold in the supermarkets.  Daikon radishes are even made into dolls for children!

The ancient Greeks and Romans loved them, too.

The Egyptians were eating them for many years before the pyramids were built…almost 5,000 years ago.

Early settlers introduced radishes to the North America…and they’ve been a popular garden crop ever since.

In addition to being a crisp, crunchy, peppery sweet vegetable, radishes contain most of the basic nutritional elements present in their garden counterparts.

All this means that every radish eaten “does a body good!” 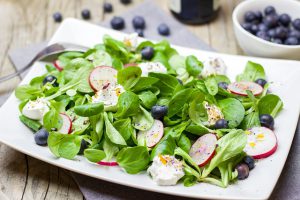 Radishes are most commonly eaten raw by themselves or in salads.  I enjoy them with a little salt or, with a favorite vegetable dip.

Don’t throw away the leaves.  They can be used raw in salads, too…or as a stir fry ingredient.

Many folks like radishes steamed…or sautéed as a side dish.  They even find their way into stews, soups, or blended fruit juices.

Have you ever tried a pickled radish?  Excellent!

A Bit of Trivia: Radish seed oil can be extracted and possibly used as a biofuel.

How to Grow Radishes

A cool weather crop, radishes are just about the easiest and fastest vegetable to grow in a backyard garden.  They germinate quickly when planted directly into the soil so, going through the germination, seedling transplanting, and hardening off processes are not necessary.

Radish seeds can be purchased in seed packets of from several hundred to a thousand seeds or more.  Or seed tape, typically around 20+ feet long may be available, depending on the variety.

The advantage with using seed tape is that the seeds are already spaced correctly, there is a high percentage germination rate, and almost no thinning is necessary.  Unroll the tape and lay it in the row furrow, cover with dirt, keep it moist not soggy, and wait for the quickly growing radishes to appear…most times as soon as 3 weeks!

Jim’s 50/50 mixture:  I use a 5-gallon bucket with a 50/50 mixture of dirt and potting soil and a couple of tablespoons of 10-10-10 fertilizer when putting seeds or seedling plants in the garden.

TIP: Do not over-fertilize radishes.  Too much nitrogen in the soil encourages leaf growth as a priority.  We want the root growth to be the priority. 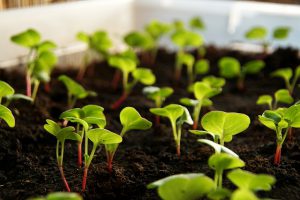 The seedlings will begin popping up in less than a week.

Radishes Are Great For Companion Planting

Radishes are great companion plants for cucumbers, tomatoes, chervil, lettuce, and peas.  If you grow them alongside lettuce, radishes will taste better.

Don’t grow them next to grapes.  Grapes have a large root system and since radishes are root crops, chances are the grape root system will get damaged every time you dig up a few radishes.

Time to Eat a Few Radishes 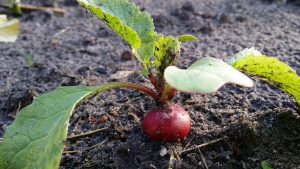 Start watching for the radish roots to bulge out of the soil after about 2 ½ weeks.  When the radish bulbs get to about 3/4 inch to 1 inch in diameter, they are ready to harvest.  If you wait too long, radishes will become tough and bitter.

Grab them by the tops and pull them out of the ground.  Wash leaves and roots.

Can You Eat Radish Leaves?

You sure can!  Eat leaves and roots either raw, steamed, or sautéed…or in stew and soups.  Grate or dice them for a hint of sweet crunchiness in just about any vegetable enriched recipe.

You may even want to try pickling radishes!  Hmmmmm…

Raw radishes will last a couple of weeks in the refrigerator.

TIP:  Any radishes that begin to bolt will have seed pods.  These seed pods are actually tasty salad ingredients!

Root maggots are the worst nemesis of radishes.  Practice good crop rotation to avoid them.

Luckily, radishes are mostly free of diseases.  The long varieties, however, can get black root.  Thus, I try to stick with the nice red, round radish varieties.

I was talking with my neighbor, Jed, the other day.  Jed’s an old-time farmer and, as such, he loves a good story.

He told me about the time a young, naive city couple was driving down the country road close to his farm and their car got stuck in a very large water-filled mud hole. 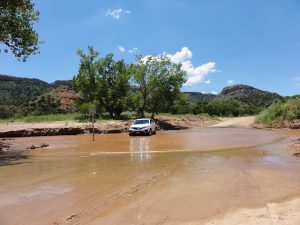 “I watched them unsuccessfully trying to get their car out of the mud hole for a while, then, I ambled over to them.”  Jed said.

“I offered to get my tractor and tow their car out of the mud for $20 and they gratefully agreed to my proposal.  Several minutes later, their car was again on firm ground.

I told them that it had been a busy day because I had to help a half dozen other cars get out of that old mud hole already.

The husband looked out at my sprawling fields of corn and asked me if I had to work my farm at night since I was so busy towing cars out of that mud hole during the day.

Well, sir, I just told him that I didn’t have time to work my farm at night ‘cause that’s when I put the water in the hole.”

Well, that’s good ole’ Jed!  Would you like to read more of Jed’s stories at the bottom of other pages on The Perfect Vegetable Garden?

2 thoughts on “How To Grow Radishes – As Easy to Grow as Falling off a Log!”