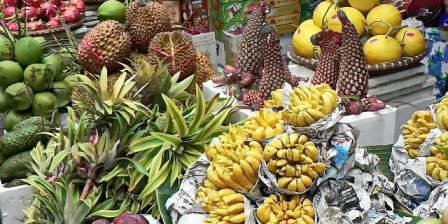 To keep me from repeating myself by going through another introduction to “Rare Exotic Plants”, head over to Rare Exotic Plants For The Backyard Garden – Part 1 – Beans.  While you’re there, look over the rare and exotic beans that are reviewed.

Once you check out “Part 1” you’ll realize why I decided to do a series of articles on all of these unique veggies.

In this “Part 2” of Rare Exotic Plants, I’ll cover some extraordinary choices of berries to satisfy every backyard gardener’s growing yearnings for distinctive and unmatched – yet delicious – plants that will bear them great fruit. 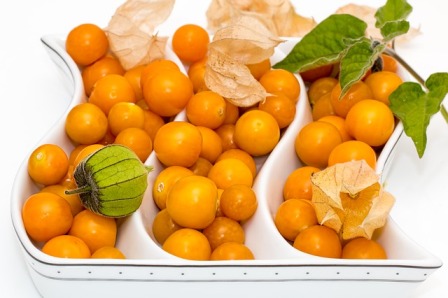 Cape Gooseberries, Physalis peruviana, grow best in hardiness zones 8 through 11 – preferring constant air temperatures in the 70’s (Fahrenheit) and above.  But, they can be grown in cooler climates using a greenhouse to increase the temperature enough to keep them happy.

The plants are happy in soils ranging from light and sandy to heavy clay – just as long as they get their fair share of water – just don’t over water them.  Even though these ground cherries prefer slightly acidic soil, they are extremely adaptable to soils that lack adequate nutrition – as long as the soil has good drainage.

Being part of the nightshade family, alongside tomatoes and eggplant – to name a few of their relatives – only the ripened fruit is edible.  All other parts of the plant; unripened fruit, leaves, flowers, stalks, roots, are toxic to animals and humans.

These golden berries were originally native to Brazil but, it wasn’t long before they started growing wild in the mountains of Perú and Chile.  Eventually, they were commonly growing in the UK, South Africa, New Zealand, Australia, a few Pacific islands, and in many parts of the southern United States.

A great source of vitamins A and C makes the berries great for the immune system and improvement of eyesight.

The ripe, yellowish-orange Cape Gooseberries have a mild sweetness – a bit like tomatoes – with a tad of sourness – much like cranberries.  The seeds inside crunch slightly when they are chewed.

The fruit is often used to offset the hyper sweetness of some desserts by bestowing a contrasting slightly sour taste.  Its vivid color also adds “food for the eyes.”  Some folks make jams or chutney with these golden orbs.  I’ve even had Cape Gooseberry pies and cakes.  Personally, I like to dehydrate them to make my own style of raisins – the dehydration process concentrates their natural sugars making them a lot sweeter. 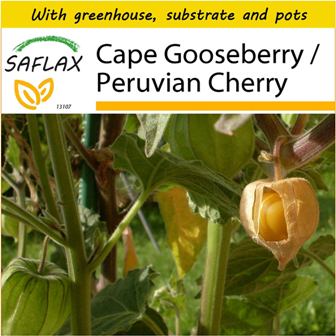 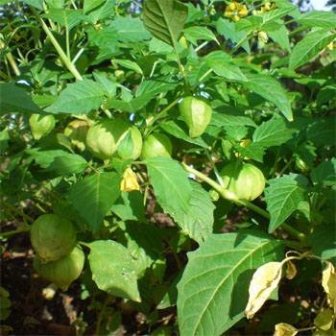 SAFLAX offers a kit of 100 seeds in a packet – along with a tiny greenhouse – and potting material composed of coconut fiber.  There are complete, detailed instructions to maximize growing success.  The seeds in the SAFLAX – Cape Gooseberry Potting Set have a very high germination rate.

Outsidepride also provides some Cape Gooseberry seeds that will germinate very well.  The seeds will germinate inside of 3 weeks – the plants will get about 2 foot tall – and harvest usually starts 3 to 4 months after planting.  The Outsidepride Cape Goosberry seed packet contains 1,000 seeds.

Next, We Turn To: 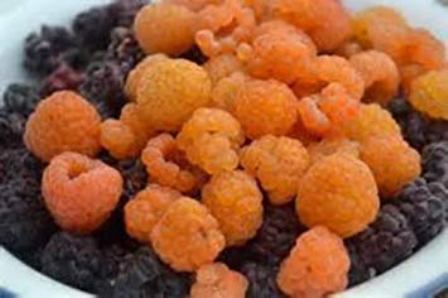 These sweet, juicy little berries are breathtakingly beautiful!  They have both a sweet and a tart taste – at the same time – creating a mind-blowing awareness when you pop one in your mouth!  You won’t believe how much they’ll make your mouth tingle!

Harvest can begin as soon as the berries turn yellow – or, if you can wait, let them mature into a deep gold color.

Needless to say – golden raspberries are a perfect addition to any dessert – and, like other berries, they show off their uniqueness in jams, jellies, and pies – if you can get enough of them after the folks pickin’ them have eaten their share off the vines while they did the harvesting.  Ya gotta watch out for those gluttonous harvesters!

I confess to using these mouth watering berries to make some very tasty wine – a time or two – or more – and, my wife utterly adores golden raspberry wine! 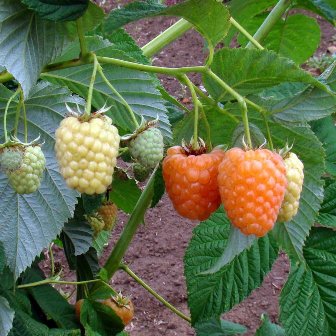 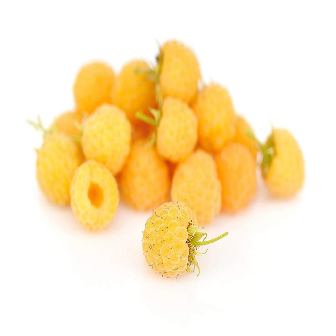 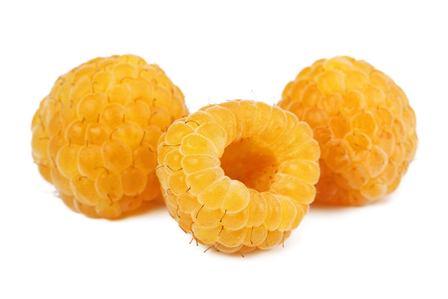 The Hirt’s Gardens Cascade Gold Raspberry Plant comes in a 4 inch pot.  The plant is very versatile and resistant to many of the main plant diseases.  It is very successful growing in hardiness zones 4 through 9 – and produces large clusters of extra-large cone shaped berries.

The Fall Gold Raspberry Plant by Grower’s Solution has the same sweet taste of red raspberries and can easily produce 2 crops each season.  You’ll get one bare root plant that can grow well in hardiness zones 3 through 9 – and, it will grow 4 to 5 feet tall – spreading out 24 to 36 inches – as long as it has well developed, slightly acidic, nutrient rich soil with good drainage – and, full sun for 6 to 8 hours per day.  This disease resistant plant grows very fast!  What an eye catching addition to any garden!

Boston Road Farm has a packet of 5 bare root canes of Anne Golden Raspberry Plants.  These are the largest and sweetest raspberries in the world – in my book!  The berry flavor has an essence of apricot and is even sweeter than the Fall Gold Raspberries.  Once established, these plants will continue to produce great tasting berries for at least 15 years – and, most likely, longer than that if you take good care of them.  Officially certified as disease and virus free, they do great in hardiness zones 4 through 9.

Have You Ever Heard Of: 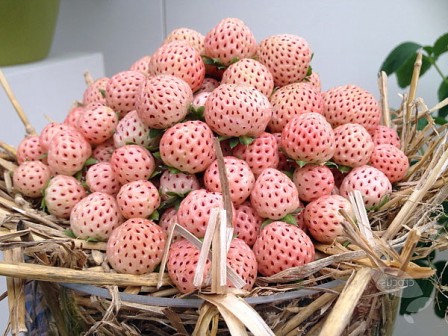 Pineberries have a truly exceptional and distinctive taste – combining the flavors of both pineapples and strawberries.  That’s how “pineberry” got its name – due to the combined flavors.

They are not actually a cross between a pineapple and a strawberry.  And, they are NOT genetically modified.  But, they are, indeed, a hybrid cross between two different varieties of strawberries – one being grown in the U.S.A., in Virginia – and, the other grown in South America, in Chile.  Plus, since they are mostly found in specialty stores, you will pay dearly for them – a half pint can cost $8.00 or more!

Pineberries are white berries speckled with red seeds and the smell is out of this world!  They love to grow in zones 4 through 8.  And, just like strawberries, they are a pleasure to eat when picked right off the plant. 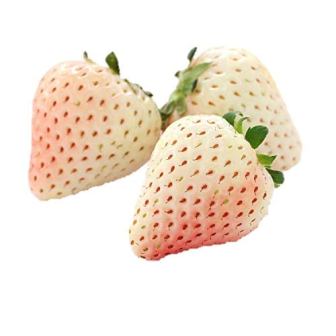 This is a very new berry.  Most of its exposure has been in European markets, as well as in the Middle East, in Dubai.  Pineberries weren’t sold in the UK until 2010 and it was 2 years later before they reached the shores of the U.S.A.  These berries have graced desserts in some of the finest restaurants in the world!

Hirt’s Gardens has a package of 25 roots of White Carolina Pineberry Plants that are very hearty and will grow as no plant has grown before – just kidding – but, they will grow quickly, that’s for sure.  Most pineberries are smaller than strawberries but, these White Carolina pineberry plants produce berries that are a little bigger than other brands of pineberries.

Wonderberries, also called sunberries, grow on a small, bushy shrub no bigger than 1 to 2 feet high.  The berries are about the size of blueberries and are a very deep, dark blue – almost black – when ripe.  Since they are part of the nightshade family, along with Cape Gooseberries, tomatoes, etc., the unripened fruit and other parts of the plant are poisonous to animals and humans.

Their taste is just very slightly sweet.  Personally, I think they are pretty bland by themselves – so, I’ve never eaten them right off the bush.  Wonderberries are usually cooked with a lot of sugar to make jams or pie fillings.  The insides are very juicy with lots of seeds. 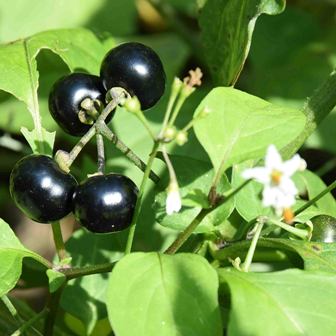 Though the seeds are very rare, Frozen Seed Capsules has Wonderberry seeds for sale – and they also include a free bonus 6 variety seed pack that has other rare, medicinal, and tropical fruiting seeds.  The germination rates are higher than I expected – a positive trait I always look for.

So There You Have It!

The second edition of rare exotic plants.  And, most of these berries can be grown in gardens from zones 3 and higher.  Not only do these berries offer new and unique flavors – but, they will add a touch of beauty to any garden – and, hey, every gardener likes some plants that can be great conversation pieces, don’t they?  Uhhhh-huh!

Comment below or shoot me an email.  Let me know if you’ve tried growing any of these berries – or, if you’re going to give them a try – in your own garden!  I’m bitin’ at the bit to hear whatcha gotta say!