Question:  What Is The Three Sisters Garden?

To answer the question, “What is The Three Sisters Garden?”…it is a Native American Indian planting technique that combines corn, green (pole) beans, and squash in the same area to compliment each other’s basic needs. On arrival in North America in the 17th century, early settlers discovered that several tribes employed this unique garden method and had been doing so for over 300 years.

These vegetables were believed to be a gift from the gods, creating physical and spiritual sustenance. The three were grown, eaten, and honored together. 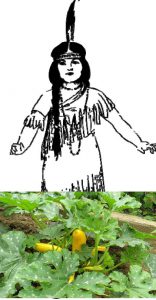 NOTE: Raccoons dearly love sweet corn but, they hate stepping on the sharp squash undergrowth to get to the corn ears.

Most gardeners plant The Three Sisters in islands as shown in this picture. 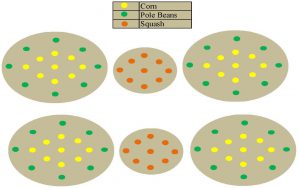 I use this island method to plant The Three Sisters and, I place 8 to 10 seeds of each sister into their special island.  After the plants get about 6 inches tall, I remove half of them, leaving only the strong seedlings to grow to maturity.

The corn is first to go in the ground.  Check out the how-to for planting corn.

When the corn is about 12 inches high, I formulate a 50/50 mixture of potting soil and dirt, add a few tablespoons of 10-10-10 fertilizer, and use the mixture to bank up the sides of the stalks in each row at least 6 inches…creating hills.

Now, I’m ready to plant the pole bean seeds in the hill banks of each corn island. Here are some across-the-board tricks for planting and spacing pole beans.

As soon as the beans are germinated and pushing up through the ground, I put in my hills of squash between the islands of corn and pole beans.  Need some tips for growing squash?  You can use any type squash, including zucchini and pumpkins.

And, there you have it! A Three Sisters garden that will replenish the soil fertility and thrive…with each vegetable sister supporting her other siblings.

There is a very good reason for using the island approach for the Three Sisters.  If the corn is planted in straight rows, the squash has to be planted between the corn rows and they will not get enough sun – stunting their growth.  The tall corn will shade the squash completely as they reach maturity.  Thus, planting in an island configuration makes it easier to strategically place all 3 plants so that they all get plenty of sunshine.

Some gardeners add a 4th sister…sunflowers or other bee-attracting plants…to help pollinate the beans and squash. The Three Sisters “Plus One” idea was first successfully used by the Pueblo Indians in the Southwestern United States.

Three sisters with memory problems, who were 96, 94, and 92 years old, respectively, lived together in the same house. 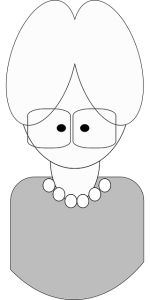 The oldest sister was in an upstairs bathroom filling a bathtub and, as she starts to get into the tub, she hesitates and yells, “Was I getting into the tub or getting out?” 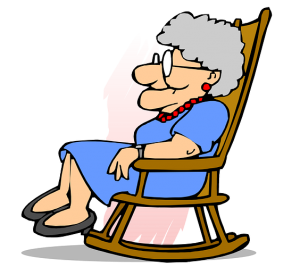 The middle sister yells back, “I don’t know. I’ll come up and see.” She gets halfway up the stairs and yells, “Was I going up the stairs or down?” 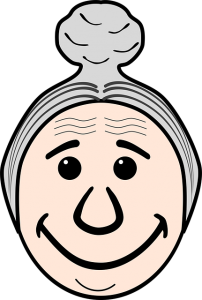 The youngest sister, sitting at the kitchen table sipping tea, shakes her head saying, “I sure hope I never get that forgetful! Knock on wood!” Then she raps her knuckles on the table.

Finally replying to her two older siblings, the youngest sister says, “I guess I have to come up and help both of you! But, first I have to go see who is at the front door.”

So much for The Three Sisters, huh?

Have you tried The Three Sisters technique?  Are you utilizing companion planting in your garden?  I am interested in your views so please share them in the comments section or by email: jim@perfect-vegetable-garden.com.

4 thoughts on “What Is The Three Sisters Garden? It’s Companion Planting At Its Finest!”