…you plan on growing tomatoes, cucumbers, or green beans – to name a few veggies that need some sturdy support.  And, since these are all the most common veggies that gardeners grow, I will assume that you are here to be enlightened about how to build a trellis for your garden – the easy and inexpensive way.  So, read on…

I cover various options for supporting your vegetables in the garden.  Having experienced an overabundance of alternatives, I’ve found that building a garden trellis is the best choice.

I will talk about the pros and cons of wooden stakes, a wooden garden trellis, and a metal garden trellis.  And, by the time you finish reading, you will be able to easily build your own trellis “on the cheap.”

Searching online will yield hundreds, if not thousands of ways to support growing vegetables such as tomatoes, cucumbers, green beans, etc.

Oh, the number of ways I have unsuccessfully tried to build a trusty support system for the vegetables in my backyard garden!  I’ve hammered a multitude of stakes into the ground, used a plethora of cages, and been through several revisions of trellises.  Read on for the the good, the bad, and the ugly! 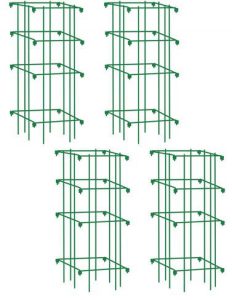 I went through the “cage” phase.  I dutifully placed cages over indeterminate tomatoes, vining cucumbers, and…yes…even green (pole) beans.  But, sticking my hand through the wire holes was a constant source of irritation when trying to prune or harvest my plants.  Finding and removing bad or diseased branches and leaves was difficult at best.

Indeterminate tomatoes, vining cucumbers, and green (pole) beans need room to grow up and out.  Trying to compact them into the dimensions of a cage created too many problems.

And, don’t get me started on how hard it was to spot the ripe veggies…  I would walk completely around each plant attempting to locate what was ready to be picked.  Then, I came back 15 minutes later…walked around the same plant…and found even more ripe vegetables that I had missed previously.

Someone once told me that I looked like I was dancing the hokey pokey in my garden!  Makes me wonder what the neighbors thought…peeking out through their windows…wondering what that crazy gardener was doing next door.

I also suffered my share of cuts on my hands and arms from the cage’s sharp metal protrusions while working around them or reaching through the openings.  I helped First Aid companies stay in business with all the boxes of bandages and Neosporin I kept in my backyard garden supply room!!!  This would be the bad. 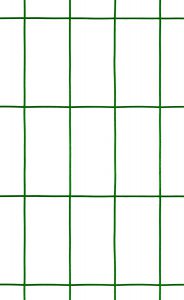 All that being said, I still utilize cages for determinate tomatoes, bush cucumbers, and green (bush) beans.  But, even though I have purchased some cages, I also custom-make some of my own with rolled fencing that I keep on hand.

Next, I tried  the “put-a-stake-at-every-plant” approach.  I bought a truckload of inexpensive 1 inch x 2 inch x 8 ft wood furring strip boards.  I sawed them in half at a steep angle…to create a sharp point on one end…making it easier to hammer the 4 ft stake into the ground.

Throughout the growing season I was noticing that just tying up the stalks of the plants, whether they were tomatoes, cucumbers, green beans, or anything else…just wasn’t enough.  I was realizing that I really did need to support the branches and vine growths, too.  When they became heavily laden with ripe produce, they would sag, branches would break, and vines would end up growing across the ground.

Also, since my indeterminate tomatoes grew 2 or 3 ft taller than my 4 ft stakes, I had to tie an 8 ft furring strip board to the 4 ft stake to accommodate the height of the plant.

And, since I was buying cheap pine wood (not treated), I was only getting a season or two out of each stake.  Weathering caused them to rot quickly…plus, you can only hammer these vulnerable pieces of wood just so many times before the tops split and break.  So, my pre-garden-season ritual included me heading to the local improvement store to buy another load of furring strip boards.  Label this: the ugly!

My first wooden garden trellis was a bit of a continuation of the one-stake-per-plant method except that I spaced the stakes farther apart with several or more plants in between the stakes.  I put the first wooden stake at the beginning of the row of plants, spacing them about 10 ft apart and connecting them with lines of 1/8 inch nylon or polypropylene rope, adding another line of rope about 18 inches above the last one…and so on.

This didn’t work too badly for green beans…but, as my tomato plants grew larger, gaining more branches and more tomatoes hanging on the branches, the ropes begin to sag and, sometimes, after a good rain, the weight of a few tomato-laden plants would be sufficient to literally force the stakes out of the soft wet ground. 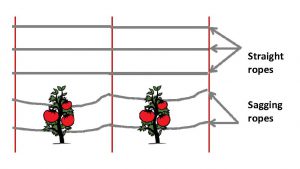 The same thing happened to a lesser extent with my cucumbers.

Additionally, just as in the one-stake-per-plant scenario, I had to add extra 8 ft furring strip boards to the 4 ft stakes in the trellis when the tomato plants got higher.

Rope durability was another thorn in my side.  Believe it or not, nylon and polypropylene rope deteriorates in an outdoor environment over a few summers and on several occasions, ropes on my trellis broke and…down came the plants.  Let me tell you…it is NOT a simple thing to re-string a trellis with new rope and pick up a plant that has fallen in on itself, breaking a few branches or vines along the way.

I started thinking…even though this was a better option that the cage, there has got to be a better way!  This situation was getting ridiculous!

So, now, I have graduated to a metal garden trellis.  I now am a Chicken Wire Trellis professional!  Yes, it’s true.  Through the experience of failures, I finally have achieved success!

I switched from wood stakes to 6-foot metal T-posts. 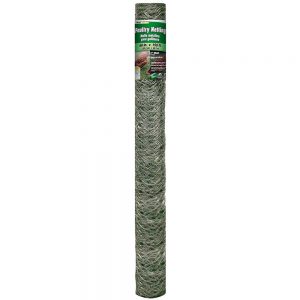 I switched from rope to 5-foot chicken wire. 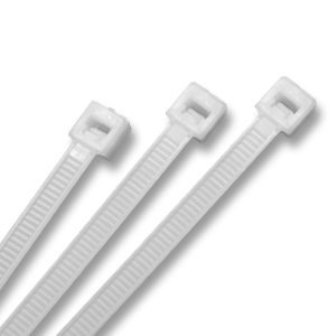 And, I used zip ties to secure the wire to the posts.

Well…not quite.  There was one more thing I had to do.  I had to put my sledge hammer back in the tool shed…and get a fence post driver. 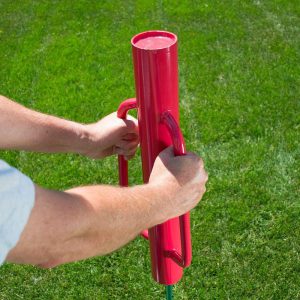 The sledge hammer worked okay…if you weren’t too picky about having stakes sticking in the ground at a 60 degree angle.  But, to drive a stake STRAIGHT into the ground, nothing works better than a tool that was made for the job.

If You Build It, They Will Grow!

Okay…I have everything I need so, here’s the skinny on construction. 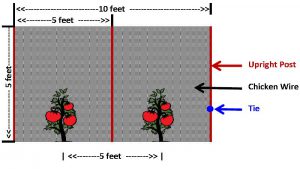 There You Have It!

Now that I have reached nirvana with my trellis, it’s time to sit back, sip an ice cold lemonade and admire my efforts because I have now arrived at the good!

All I had to do now was convince my wife to give me all her throw-away pantyhose.

“For string ties!  Not for modeling!  Besides, they wouldn’t fit me anyway!”

So, now that you know how to build a garden trellis, what do you think about my chicken wire trellis?  Got any other tried and true methods to support your plants?  I would like to hear from you!  Comment below or email me: jim@perfect-vegetable-garden.com.

4 thoughts on “How To Build A Trellis For Your Garden. Cheap and Easy!”