About Growing Kohlrabi?  We Go Way Back 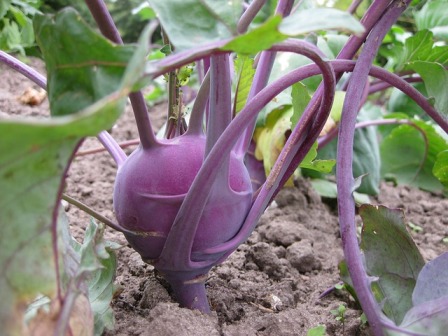 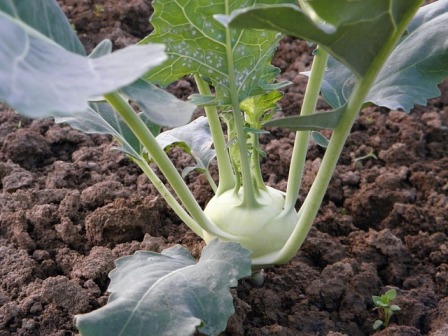 I can remember back in “the good ole days” that growing kohlrabi was always destined to be one of the many gardening tasks I had when my dad cultivated veggies in our backyard garden.

He dearly loved those tennis ball sized globes with the stiff branches sticking out of them – like spokes on a bicycle wheel.

My dad would pick a ripe sphere of kohlrabi out of the garden – rinse it off under the garden hose – pull a salt shaker out of his pocket and give it a dose – then happily consume it while watching me weed and mulch our garden.

Personally, I never developed a taste for them until later in life – when I discovered some unique ways to consume them – both raw and cooked. 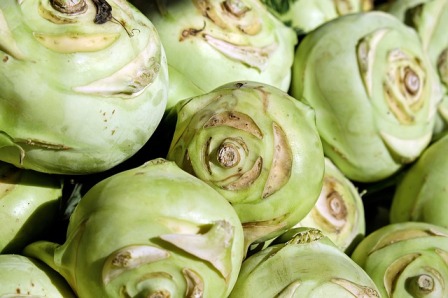 That’s right.  Kohlrabi is a German name meaning “cabbage turnip” – kohl (cabbage) – rabi (turnip).  This little orb had its beginnings in the 1500’s – in northern Europe – Germany and surrounding areas.  Needless to say, German folks around the world have a special place in their heart for this veggie.

It wasn’t until the 19th century that kohlrabi made itself known to gardens and groceries in the U.S.A.

In eastern India – West Bengal and Bangladesh – they identify it as “Ol Kopi” – but, in India’s Kashmir Valley it’s called “Monj-hakh.”

In northern Vietnam, they refer to kohlrabi as “su hào.”  In Cyprus, the label is “kouloumpra.”

But, “Kohlrabi by any other name – is still a cabbage turnip!”

The short answer?  Take a guess… 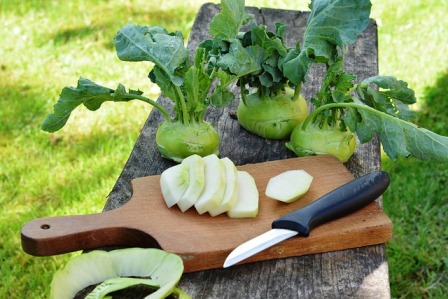 Since its name actually means “cabbage turnip”, it obviously tastes like a cross between a cabbage and a turnip – only milder and sweeter.  And, you can eat every part of it – from the rounded base to the stems, leaves and flowers.

Kohlrabi stems have a texture akin to broccoli stems – while kohlrabi leaves and flowers can be substituted in dishes calling for spinach, collard greens or kale.

I usually skin kohlrabi with a vegetable peeler – just like I do with potatoes.  However, kohlrabi skin is completely edible – if you don’t mind its slightly tough and rubbery texture.

Raw Or Cooked Kohlrabi?  You Decide!

Latching onto my earlier experiences as a youngster – working in my dad’s garden – I never developed a taste for raw kohlrabi.  Although, my wife tells me how much she likes to eat it raw – with a little sea salt – much like my dad enjoyed it.  She likes the crunchiness – and, sometimes she dribbles olive oil on her kohlrabi before salting it. 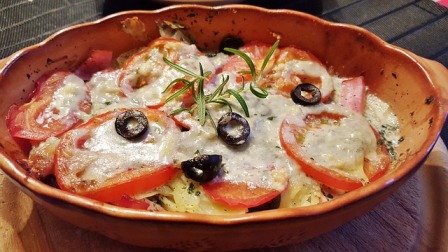 If I have my druthers – I’ll stick to cooking it – sautéed, baked, steamed, boiled in soup, etc.  A favorite of mine is a baked dish of kohlrabi – covered with sliced tomatoes and mozzarella cheese.  Throw a couple black olives and a few sprigs of rosemary on top and it’s a meal fit for a king!

I’ve even used a mandarin slicer to make my kohlrabi slices paper thin – microwave them on a Pam coated plate for about 3 minutes – add my favorite garlic salt or sour cream powder – and they taste almost like potato chips – except healthier!

Kohlrabi Is Just Another Vegetable That Is Good For You!

Full of vitamins (A, B, C, K), kohlrabi also has a host of other nutrients: calcium, antioxidants, iron, potassium, copper, carotenes, manganese, etc.

So, it makes sense to include these globular, alien-looking veggies in a lifestyle geared to nutritiously achieving a healthy body.

Kohlrabi plants are white, purple, or light green – with White Vienna and Purple Vienna being the most popular.  Here are my three favorites – and they all reach full maturity in 7 to 8 weeks at the most.

Planting Kohlrabi Is A Cinch!

The majority of my vegetable seeds go through a standard pre-planting process indoors: germination, transplanting, and hardening off.  But, kohlrabi seeds germinate so well in the outdoors that I just stick them directly into the backyard garden.

Don’t forget that wherever they’re planted, they will need at least 6 to 8 hours per day of full sun. 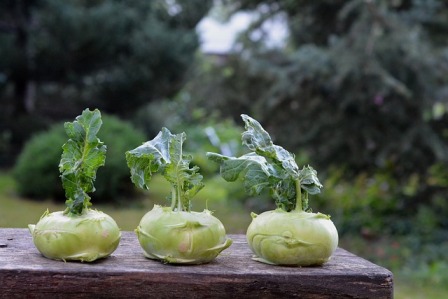 Once the round little guys get 2 or 3 inches wide, the whole plant can be harvested and eaten.  Or, you can wait until they are full size – anywhere from 4 to 6 inches.  Just whack them off under the globe with a sharp knife.

After peeling them, place in a sealed plastic bag and refrigerate.  They’ll stay fresh for at least a couple of weeks – maybe a little longer.

For longer storage, peel, blanch, and slice them – fill a freezer bag – and pop them in the freezer.  They’ll be good for at least a year.  And, if you vacuum pack them, they will stay fresh for a couple of years – frozen.

Kohlrabi is also a great candidate for pickling – the same way you would pickle cucumbers.  Try it!  You’ll like it! 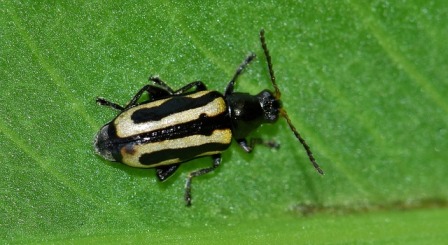 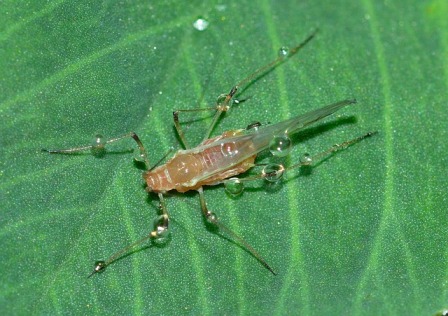 There are a number of evil critters that attack kohlrabi – but, the most common are cabbage worms, flea beetles, and aphids.  They like young plants the most – so, pay attention – and as soon as you spot these varmints, hit them with a good spraying of Ortho Flower, Fruit and Vegetable Insect Killer.

Fungal diseases like leaf spot, downy mildew, and powdery mildew are quick to attack kohlrabi – especially if most of the watering is done overhead – instead of with soaker hoses.  Attack these diseases quickly with a quality fungicide like Daconil or Physan 20 to put an end to their plant terrorism.

If these diseases overwhelm the plant, it is best to completely remove it, bag it, and put the bag on the curb for the garbage collector.  Do not – I repeat – DO NOT – put the diseased plant anywhere close to the garden area or your compost pile.  You don’t want any fungal diseases finding their way back into your plants – EVER AGAIN.

My neighbor, Jed, the retired farmer, was looking over my kohlrabi plants recently and he recalled the time his cow, Bessie, had gotten outside the fence and was high tailing it down the road. 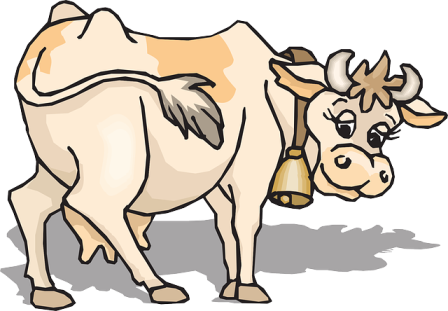 He finally caught up with Bessie, threw a rope around her neck, and started leading her back to the barn.

He had walked only a few yards when a truck came barreling down the road and slammed into Bessie – sending Jed and Bessie flying into a ditch.  The driver of the truck kept on going – but, Jed saw the name of the trucking company and the truck’s number on the side of the truck just before he passed out.

Jed’s injuries were so severe that he decided to sue the trucking company in court.

“Didn’t you tell the officer at the scene of the accident that you were fine?”

“Well, let me tell you what happened.  I was leading my cow, Bessie, down the road when…”

“I never asked for details.  Answer YES or NO – didn’t you say at the scene of the accident that you were fine?”

“You have to understand.  Me and Bessie were walking down the road when…”

For the second time the lawyer interrupted – pleading with the judge…

“Judge, all I’m trying to do is establish that, at the scene of the accident, this man told the police officer that he was just fine!  And, now, a month after the accident, he is suing my client.  I am convinced that his claim is fraudulent!  Would you please tell him to simply answer the question?”

By now, the judge was curious about Jed’s explanation and stated…

“I’d like to hear what Jed has to say about his cow, Bessie.  So, you are overruled.  Jed, please finish your story.”

Then, Jed happily went on…

“Thank you, your honor.

As I was saying, me and Bessie were walking down the road when this truck came along and smacked into Bessie so hard it knocked both of us head over heels into a deep ditch.

Then the truck driver took off – probably hoping that they wouldn’t get caught.

I was hurtin’ real bad and couldn’t hardly move – and, I know that Bessie was in bad shape, too – ‘cause I could hear her just a moanin’ and a groanin’.

Pretty soon, one of Sheriff Andy’s deputies came by – and, the first thing the deputy heard was the racket Bessie was makin’ – so, he walked over to her – and looked at her real careful like.  Then, he took out his gun and shot her right dead between the eyes.

Right after that, Andy’s deputy walked on over to me – with his gun in his hand – and looked down at me saying…

‘Jed, your cow, Bessie, was in such bad shape that I had to shoot her.  How are YOU feeling?’

Now, your honor – I was lookin’ over at poor Bessie – and lookin’ at that there gun in the deputy’s hand – and no matter how busted up I was – I just had to say, I FEEL FINE!”

I don’t blame Jed one bit – I think I would have said that I was fine, too – no matter how bad of a shape I was in!

Comments and emails are welcome.  Are you a kohlrabi grower?  Interested in trying it?

4 thoughts on “Want Somethin’ Different?  Then, Growing Kohlrabi Is Your Answer!”